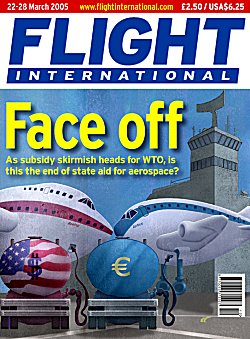 The clock is ticking in the trade dispute between the US government and European Commission over subsidies for Airbus and Boeing. While there is little progress towards settling the dispute through negotiation, litigation is moving steadily past a series of milestones leading to a World Trade Organisation (WTO) ruling.

While 2005 saw the launch of rival dispute settlement procedures at the WTO, 2006 will see each side detail its case against the other’s alleged subsidies – principally launch aid for Airbus and research and development funding for Boeing – and defend its own mechanisms for providing government support to manufacturers.

Although a decision in the largest-ever US-European trade dispute is not expected until early 2007, the battle will be won or lost this year as each side defends the territory staked out in 2005 when Washington launched its WTO case against Brussels and Airbus launched the A350, its rival to Boeing’s 787, with the promise of launch aid.

Arguing that negotiation had failed, the USA embarked on the litigation route on 31 May, asking the WTO for a dispute settlement panel and prompting the EC to request a panel to hear its complaint against the USA. The WTO agreed on 20 July to establish panels to rule on the rival cases, but neither Brussels nor Washington could agree on their membership. In the end, on 17 October, the WTO itself appointed the three-member panels that will hear each case.

Both are experienced and respected trade officials. “The chairs are both people of some consequence, who will command the respect of the panels and the parties,” says a source close to the dispute. “We can expect a critical, thoughtful hearing from them.”

On 23 September, meanwhile, the dispute settlement board designated Mateo Diego-Fernandez, deputy chief of the Mexican delegation to the WTO, as facilitator for the so-called “Annexe V” information-gathering process. This is equivalent to the discovery phase in a lawsuit and allows each side in a dispute to request information from the other.

Scheduled to have been completed by late December, the Annexe V process involved an exchange of questions between the governments, funnelled through the facilitator, with the information provided to both panels. While either government could refuse to provide requested information, they risked influencing the panel’s final ruling, the source says.

The panels established and information gathered, both cases are expected to move to hearings early in the new year. The EC and US cases are expected to run in parallel throughout the year, beginning with the first submissions by each complainant. These will be followed by rebuttal submissions by each defendant, and will provide the first public insight into the substance of the rival US and EC complaints.

“The first filing of substantive briefs will make public the arguments, positions and facts, although portions will remain confidential at the request of the companies,” says the source. “Those should take place in mid-March.”

Filing of the briefs will be followed by oral arguments before the panels, leading to one or more rounds of questions before second meetings of the panels, each of which will then produce a series of reports: a factual report; an interim decision that will go only to the parties involved; and then the final decision.

This process is expected to run the course of 2006. “If it goes to term, we can expect a final decision early in 2007,” says the source. The losing party in each case can then appeal the WTO’s ruling, a process that could take another three to four months, leading to an appellate body decision by mid-2007.

What each side wants

It is far from clear what the result of this dispute could be. The USA wants launch aid outlawed, and any outstanding loans to Airbus repaid or converted to commercial terms – meaning higher interest rates and faster repayment times. Europe would appear to want a US guarantee that Department of Defense and NASA R&D funding for Boeing cannot benefit its commercial aircraft business.

The losing party in each case can choose what to do: come into compliance by withdrawing the subsidy; do nothing; or offer compensation. “If there is no compliance, the winning party can be authorised by the WTO to rebalance what was lost,” the source says. This could involve retaliatory measures such as imposing tariffs on imports until the losing party comes into compliance.

With the US case targeting $15-17 billion in launch aid principal provided to Airbus, including $4 billion for the A380, the stakes are high. As a result, Brussels and Washington are expected to remain open to a negotiated settlement, even after the WTO panels have ruled on the dispute.