Airbus Defence & Space is facing a fresh crisis on its A400M military airlifter, after problems were discovered with the power gearbox of its Europrop International (EPI) TP400 engines.

Speaking on a 28 April first-quarter results call, Harald Wilhelm, chief financial officer of Airbus Group, said it has launched a “thorough technical and industrial evaluation” to develop both short- and long-term solutions to the issue.

A statement issued with the financial results warns of “serious challenges for production and customer deliveries” of the A400M this year caused by the fault. It is also the subject of an airworthiness directive issued by the European Aviation Safety Agency, but no details were immediately available.

Wilhelm says that just two examples of the tactical transport were handed over in the first quarter, but he declines to estimate whether it will still reach its target of “around 20” deliveries this year.

“As we speak, I cannot give you a new number,” he says, noting that Airbus will “review the delivery planning, with the supply chain, and certainly also with the customers”.

But Wilhelm admits that maintaining output will depend on the availability of compliant power gearboxes “for line fit”.

“We will not continue producing aircraft on the A400M programme if we don’t know about the power gearbox,” he says. The immediate priority is to “support customers” who have in-service aircraft, to allow them “to operate the aircraft”.

Although conceding that the programme has suffered another “setback”, Wilhelm maintains it is “fundamentally different” to the “big crisis”, relating to the cracking of TP400 propeller hubs, experienced by the A400M in 2009 and 2010.

As such, he feels the risk of cancellation – of either complete orders or individual aircraft – “is very remote”. 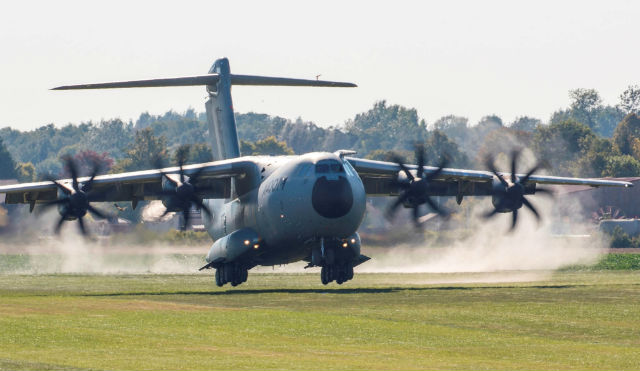 The power gearbox is produced by GE Aviation-owned Avio Aero in Italy, and Wilhelm says he expects “industrial and financial support” from the company to address the problem.

Wilhelm reveals no details on the nature of the fault, but Philippe Petitcolin, chief executive of Safran – part of the EPI consortium – says two separate issues have become apparent since the beginning of the year.

The first, he said, during Safran’s three-month trading update, was related to manufacturing defects that have since been addressed. However, the second problem is a “shorter-than-expected lifespan” of a specific component within the power gearbox.

A short-term fix will be ready in “the next few weeks”, while a “definitive” long-term solution is “months, instead of weeks” away, warns Petitcolin.

Avio says its engineers are “fully engaged” with EPI and Airbus to solve the issue. “All of us are committing considerable resources to provide all necessary technical support to ensure safe operations of the A400M fleet,” it says.

Separately, Airbus has also warned that adding military capabilities to the A400M “remains a challenge during the ramp-up phase”.

“The company is working with customers to agree a schedule of military capability enhancement and deliveries,” it says.