Where did your passion for aviation begin?

When I was 10 years old, we moved close to RNAS Lee-on-Solent (HMS Daedalus), then then headquarters of the Fleet Air Arm, where we had fast piston-engined aircraft like the Hawker Sea Fury and de Havilland Sea Hornet doing their best to knock off our chimney pots on short finals. I had a naval background – my father was an Engineer Rear-Admiral – and I only wanted to be a Royal Navy pilot.

How did you get involved in flying?

I learnt to fly through the air cadets and an RAF Flying Scholarship, with 30h on a Tiger Moth qualifying for a private pilots licence. I then did National Service, starting as an Royal Naval Volunteer Reserve pilot, but our training course was cancelled because of government defence cuts.

I joined BOAC in September 1958 under the Pilots Initial Navigation Scheme, which saw me using techniques like astronavigation on the Douglas DC-7C, Bristol Britannia, de Havilland Comet 4 and Boeing 707-436. The latter would became my first commercial type rating as a pilot.

In 1969 I was selected for BOAC's first Boeing 747 course to help introduce the new automatic inertial navigation system (INS). This soon proved unnecessary as it was soon apparent that the INS worked beautifully while the engines did not, so I became a first officer pilot instructor and a type rating instructor and type rating examiner on the 747 simulator.

The 747 entered service with BOAC in 1971 and its introduction soon coincided with the 1973 oil crisis. I then became involved in fuel conservation, which was successful and helped keep BOAC profitable until the merger with British European Airways to form British Airways. 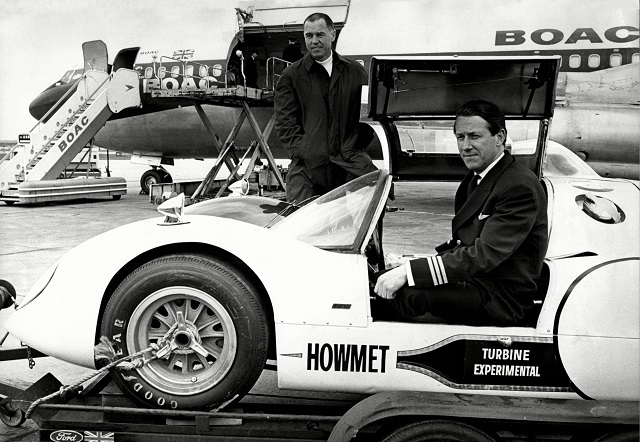 Dibley and his machines: In his Howmet TX with trusty Boeing 707 alongside

Noise from aircraft approaching Heathrow was increasing unnecessarily due to them flying low in a high-drag configuration. This prompted me to write in the March 1974 issue of the Journal Of The Guild of Air Pilots And Air Navigators, proposing changes that eventually helped lead to the introduction of low-drag, low-power continuous-descent approaches. I found contributing to these improvements in aviation as satisfying as my motor racing endeavours.

In 1975, I became a captain on the 747 and the final part of my BA career – when I was not motor racing – saw me take on several other duties, including flight superintendent technical on the Lockheed TriStar (long-haul) and 747 flight manager technical. I then joined the private flight of His Highness Sheikh Zayed bin Sultan Al Nahyan, the then president of the United Arab Emirates, as chief pilot and director operations. I had spells as chief pilot at Air Hong Kong and Air Mauritius – the latter included serving as an Airbus A340 check captain. I then worked for Airbus's training division in Toulouse between 1995 and 2002 as a flight instructor/examiner and technical pilot on the A320 and A330/A340.

How did you fit motor racing into the day job?

The rostering/scheduling department did their best to help me be at home for races, but other colleagues also wanted to be back for weekends. Occasionally they promised I'd get back for a race, only to find the flight was arriving at 06:30 after flying Detroit-Boston-London!

What were the highlights of the racing side of your life?

The trick is to get the right car at the right time and for me this was a 2.5 litre Brabham BT8 in 1964, which was an old Formula 1 car with a body that was not optimised aerodynamically. Initially, the car was undriveable – Stirling Moss had a go when testing at Silverstone and after three laps declared: “It’s dangerous.”

We tacked a fairly crude aluminium spoiler onto the rear and changed to 13in wheels, which transformed the handling. At a club meeting at Goodwood in May 1964 I managed the first 100mph sports car lap and was awarded a “Goodwood Ton” – a little ton weight, like one given to Stirling for the first 100mph lap of the circuit. This helped me to be granted the extreme honour of being made a Legend of Goodwood in 2008.

At the Grand Prix meeting at Brands Hatch in July, I won the supporting sports car race – Jackie Stewart, who was driving a much slower Tojeiro Jaguar, apologised for holding me up on a couple of corners.

In 1967, I formed a small company – Palliser Racing Design – to make single-seaters primarily for export to the USA. We built about 100 cars and won four championships, but it proved to be too much work and I had to wind it up – or give up flying. A highlight was the 1968 Le Mans, where I set the fastest lap for a gas-turbine powered car driving the Howmet TX.

What advice would you give young people looking to start a flying career?

It’s not the same these days with the flightdeck door closed, but it's still better than working! Remember the job of flight operations is to carry the maximum payload at minimum cost, which can include safety, fuel economy, noise, smooth handling, passenger service. So, the more interest you take – rather than just punching buttons in the right order – the more likely you are to remain happy!

Looking for a career in aviation? Check out FlightJobs