What got you into skydiving?

My parents are both skydivers. They met on a drop zone. I did my first skydive in tandem with my dad when I was 10 years old and I loved it. When I was working in skydiving, I was doing mostly some advanced coaching in my competition discipline, freeflying and some coaching in wind tunnels as well. There was a period where we were combining sponsors and coaching, until we had enough good sponsors to only live off sponsorship. It's different in base jumping because there are very few schools in the world, so professional base jumpers mostly live off sponsors. I've never had a regular day job outside of skydiving.

Of your many records, what are you most proud of?

Some of the best were the competition jumps that led my team to victory. Then there are projects like base jumping off Burj Khalifa [the tallest structure in the world, in Dubai], jumping at 33,000ft above the highest mountain in Europe, and base jumping with my wingsuit at night in the moonlight.

How did you join the Jetman team?

My teammate Vince Reffet was the first student of (original Jetman) Yves Rossy. I tried it as soon as I got the chance and I loved it too. It was at that time, when the Jetman project got sponsored by Dubai, that I started my formation. There was no tryout. We met Yves a while ago on drop zones and we became friends.

Why operate out of Dubai?

I have been living in Dubai since October 2014. The Jetman Team is based in Dubai, a city that offers premium aerial sport facilities such as Skydive Dubai, Sky Hub and Inflight Dubai. During the summer months, however, because of the United Arab Emirate's hot weather, the team moves the operation to Costa Brava in Spain. 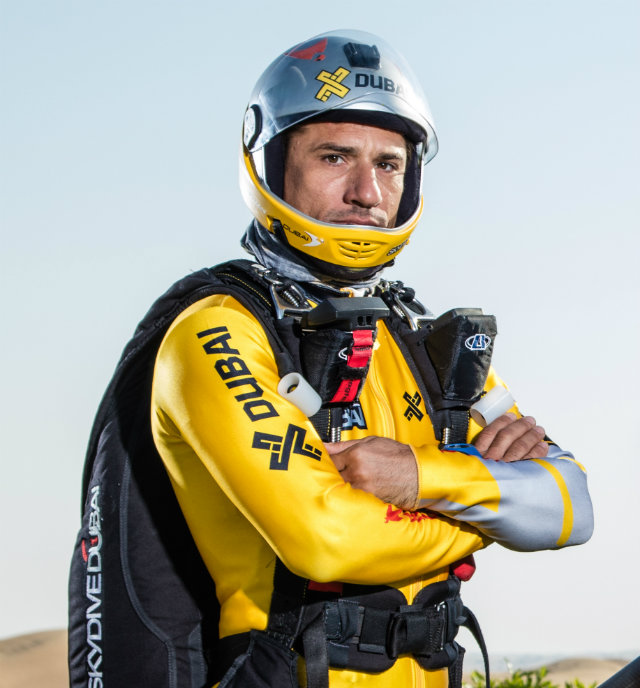 What's the goal of the Jetman programme?

We're developing the jet-wing technology to explore its possibilities in the progression of human flight. The main goal we’re aiming to achieve over the next few years is to perform an autonomous flight that does not require any airplane or helicopter’s support. Flying longer jet-wing flights and reaching higher altitudes are also among our targets for the near future.

Can you go flying wherever you want?

Every project involving a jet-wing flight is approved and planned by the Jetman Team. Each country has its own regulations and we need to request the correct permits in order to fly the jet-wing abroad.

What are the dangers or challenges?

The hardest part is to have perfect reaction in case of a dysfunction of the wing. Sometimes it happens. There are some procedures to know by heart and keep cool at any moment. Then it's all about flying your body precisely.