Italy’s M-345 trainer programme will be advanced next year with the first flight of a development example equipped with a new engine and modern avionics, Alenia Aermacchi says.

Scheduled to make its flight debut during the first half of the year, the new aircraft is being adapted from the company’s previous demonstrator for the M-311, and will be powered by a Williams International FJ44-4M turbofan engine.

Alenia Aermacchi has, meanwhile, already launched the production of its first new-build prototype of the M-345, with the enhanced design featuring a new landing gear, nose section and replacement canopy. To support certification activities for the new model, this is due to make its debut flight during 2017.

Launched during the Paris air show in June 2013 with the backing of the Italian air force, the M-345 high efficiency trainer is due to replace the service’s current MB-339s during the delivery of pilot training. Deliveries are expected to commence during 2018, with the type to be used also to re-equip its Frecce Tricolori aerobatic display team. 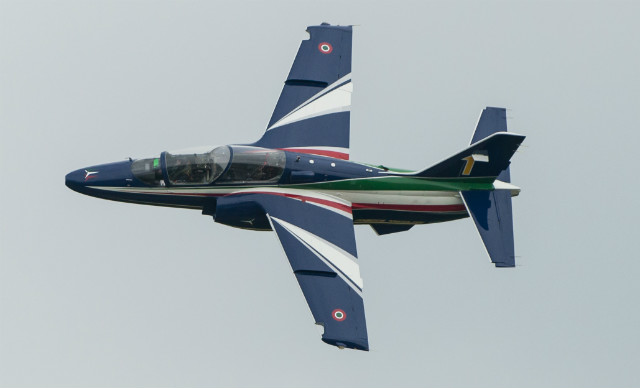 The manufacturer says negotiations continue with the air force to determine the number of aircraft required, and that the design is also “generating a lot of interest around the world”. A memorandum of understanding linked to the model was signed with Chile’s Enaer earlier this year.

Alenia Aermacchi’s plans for the type – which it describes as a “simple, cheap solution” for replacing in-service types such as the Aero Vodochody L-39 – will also include a light-attack version, to be made available from 2019.