Raytheon is currently in dialogue with the UK Ministry of Defence regarding the possible upgrade of its Sentinel R1 surveillance aircraft to include a maritime search capability that the Royal Air Force said it desired back in July.

During the Farnborough air show UK Prime Minister David Cameron pledged to extend the Sentinel programme to 2018, as well as earmarking some £1.1 billion ($1.8 billion) for a series of defence developments, including investing more in intelligence, surveillance and reconnaissance.

In parallel to the operational extension of the Bombardier Global Express-derived Sentinel, the RAF declared during the air show that it would desire a maritime surveillance capability for the primarily overland-operated aircraft. This could be achieved by adding a software-based maritime channel to the radar, although the actual means by which this would happen in terms of programme scheduling and funding is yet to be decided. 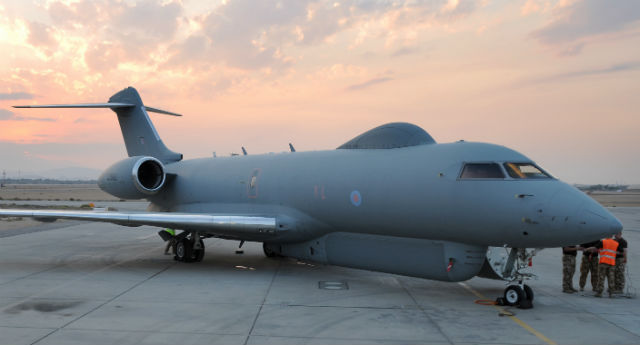 Philip Nettleship, chief engineer of airborne solutions at Raytheon, says that one aircraft will be used to test the upgrade – which would effectively turn the aircraft into a maritime surveillance aircraft – and this would be tested in 2015.

“It will go into a trials period,” Nettleship says. “We’re not 100% sure when that will start, and we’re still in discussions as to what will happen.”

Nettleship stresses that the aircraft would not fit a maritime patrol aircraft role – a capability that the UK is lacking – but the company is in conversation with Airbus regarding a potential solution for this should a requirement be formalised.

He says that of the five-strong Sentinel fleet, one aircraft is in maintenance in the UK, one is being used for training in the UK, while it is believed that two are stationed in Oman to be easily deployed for operations in Afghanistan. The other has been operating in Nigeria this year in the fight against Boko Haram militants, although it is unclear as to whether this aircraft still remains in Africa.

The UK provides the Sentinel as its offering for NATO ground surveillance. The alliance is also acquiring the Northrop Grumman RQ-4 Global Hawk high altitude, long endurance unmanned air vehicle, which other nations are providing financial support for.

According to a parliamentary response from this week, it will cost £198 million for the UK to keep all five Sentinel aircraft in service until 2018.