Turkish Aerospace Industries has begun work an a winglet design for its Hurkus single-engined trainer, and has installed the modification on both of its current test examples.

“We are looking for different designs to make Hurkus more perfect. Winglets is one of them," says Ozcan Ertem, head of the company's aircraft group. The addition of winglets enables a trainee pilot to recover more quickly from a spin, he adds. 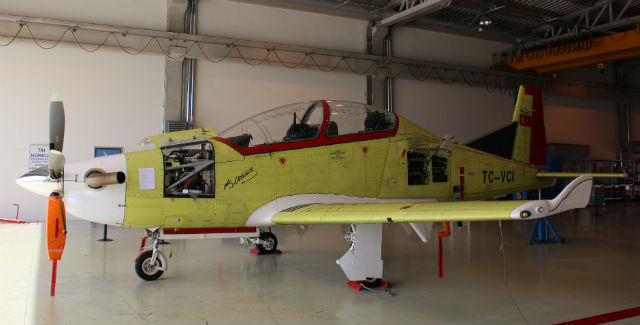 Spin tests with the Hurkus will begin next month, with a parachute recovery system also being fitted to the aircraft.

So far, TAI has accumulated 235 flight hours with test aircraft TC-VCH and TC-VCI. The company is aiming to secure certification from the European Aviation Safety Agency before the end of this year.

The second phase of the project is the glass cockpit-equipped Hurkus B, which will be produced for the Turkish air force. The type will support the service's current fleet of 40 Korea Aerospace Industries KT-1Ts, based in Izmir. Ankara hopes that the location could become a NATO flight training centre.

According to a contract between TAI and Turkey's undersecretary of Defence Industries, 15 Hurkus Bs will be produced for the Turkish air force by 2018. The company also is looking to produce a close air support version named the Hurkus C.

Powered by a Pratt & Whitney Canada PT6 engine, the Hurkus has achieved a maximum speed of 295kt (545km/h) and an altitude of 30,000ft during flight tests.