The most obvious ommission from the list was the national carrier from host Germany, Lufthansa, which repainted the nose of one of its Airbus A340-300s (D-AIGS) with a soccer ball pattern (pictured below).

Yesterday morning Swiss regional carrier Darwin Airline transported the Alpine nation's team of 23, along with the coach Koebi Kuhn and his technical team, from Zurich to Frankfurt, where they were transferred to a retreat at Bad Bertrich before their opening match against France on Tuesday in Stuttgart. One of the airline’s Saab 2000s used for the trip (HB-IZZ) was given a decal urging "Hopp Schwiiz!" ("Go Switzerland" in Swiss German) for the honour (pictured below).
Finally, readers in Japan have pointed out that the Japan Airlines World Cup livery scheme did not start with the Samurai Blue paint job. One of its 747-400s (JA8909) sported a similar homage to the Nippon national football team, with Yokohama striker Tatsuhiko Kubo featured on one side of the aircraft, (pictured below) and goalkeeper Yoshikatsu Kawaguchi, from Jubilo Iwata, on the reverse. This paint job has now been removed from service. 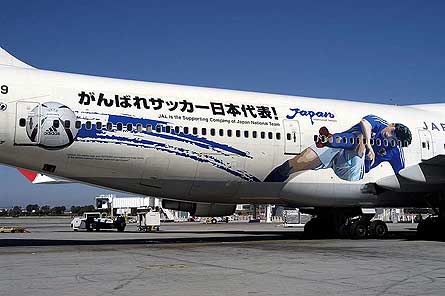