Russia on 8 June publicly unveiled the Irkut-led bid for a slice of the surging world market for single-aisle aircraft, joining rivals from Canada and China to challenge the American and European behemoths.

With prime minister Dmitry Medvedev seated in the audience, Irkut rolled the first structurally-complete MC-21-300 into a flight test hangar in a sprawling, 80-year-old factory complex located in Irkutsk, the capital of East Siberia.

“The MC-21 by its technology level I should say it exceeds the existing airplanes and aircraft. I’m sure it will be a great aircraft: economical, safe and reliable. Today’s events confirm we are capable of building such aircraft that doesn’t only promote our airplane industry but we also compete with other countries,” Medvedev said through an interpreter.

Six years after Aeroflot ordered 50 MC-21s to launch the programme, Irkut has collected a total of 175 firm orders from operators in Russia and the Middle East. But that is a tiny fraction of the global market for single-aisle aircraft now dominated by the Airbus A320 and Boeing 737 aircraft families. 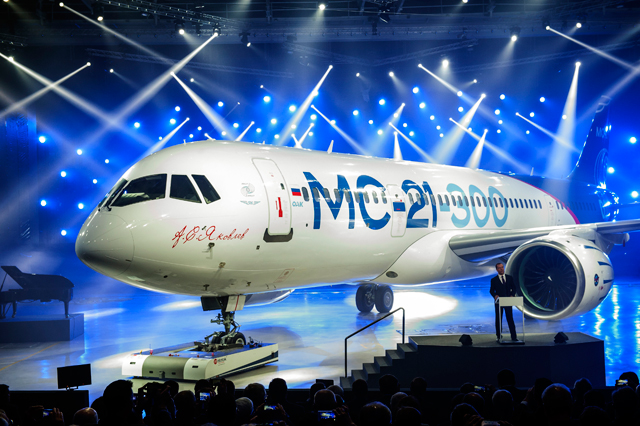 “We have come a long way and here we are today,” says Oleg Demchenko, chief executive of Irkut.

In many ways, MC-21 aircraft family appears to offer a formidable challenge. Fitted with a pair of Pratt & Whitney’s state-of-the-art engines as one powerplant option, the MC-21’s uniquely crafted composite wings lift the widest fuselage that is pressurized at the lowest density altitude in the single-aisle class, with an integrated flight deck and full fly-by-wire flight controls.

Known mostly as a manufacturing house for Sukhoi fighters and Yakovlev trainers, Irkut has invested heavily in manufacturing technology to support the MC-21 programme. A tour of the Irkut factory on 7 June revealed fuselage and final assembly bays filled with automated machines for drilling and laser-alignment for precisely mating the sections together.

In Ulyanovsk, Irkut supplier AeroComposit has developed an advanced assembly system for the Sukhoi-designed wing of the MC-21. To fabricate the wing skins and wingbox, AeroComposit copied a Diamond Aircraft and Fisher out-of-autoclave curing technique for a carbonfibre matrix strengthened with a resin transfer infusion process. If successful, the MC-21 will become the first commercial aircraft to enter service with an out-of-autoclave curing method for primary structure.

Irkut has so far launched the smallest two versions of a projected three-member family. A 240-seat model dubbed the MC-21-400 remains a distant objective for the programme. 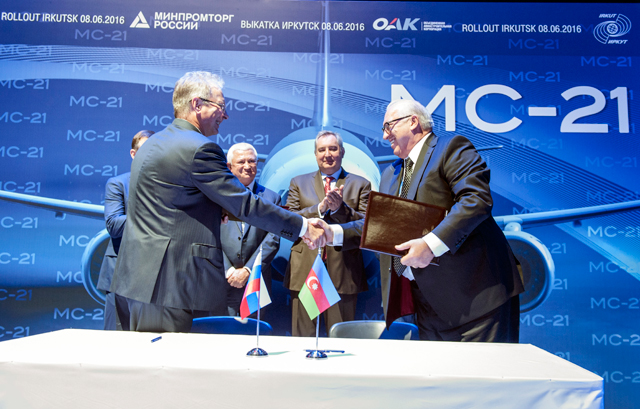 But the MC-21 also faces many challenges — not least the continued domination of the single-aisle market by Airbus and Boeing. The MC-21 also is dealing with political problems. Since the collapse in the value of the ruble beginning in 2014, the Russian Federation has set a national policy of substituting imported Western goods with locally-sourced technology. Western suppliers contribute several critical systems for the MC-21, including the avionics, landing gear, hydraulics, power systems and engines. Replacing those suppliers with Russian sources could significantly delay the programme and drive up costs.

So far, Irkut has successfully resisted a broad application of the import substitution policy on the MC-21 programme. The company is focused on certificating the aircraft with the suppliers as soon as possible, allowing Irkut to deliver the aircraft on the current schedule to Aeroflot at the end of 2018.

But the MC-21is already running two years late and continues falling behind schedule. A first flight is officially scheduled by the end of the year, but programme officials acknowledge that timeline is a “hope” versus a firm plan.