​UCLASS reborn as US Navy spy-tanker

The US Navy’s long-running attempt to field a carrier-based unmanned combat aircraft has taken another turn, morphing from a surveillance and strike aircraft into a reconnaissance and aerial refuelling drone with “limited strike capability”.

The about-turn follows a top-level review and restructuring of the now-defunct unmanned carrier-launched airborne surveillance and strike (UCLASS) project, with the service’s latest budget instead funding the RAQ-25 CBARS, or carrier-based aerial refuelling system.

According to budget documents, $1.1 billion has been committed to UCLASS through fiscal 2016, supporting carrier-based demonstrations of the Northrop Grumman X-47B and other activities. About $435 million was enacted by Congress for 2016, but CBARS takes form with just $89 million in the fiscal 2017 budget submission.

Total funding for CBARS is $2.2 billion through 2021 and a competition and downselect of an air vehicle provide has been delayed by approximately one year to 2017 compared to the discarded UCLASS plan. Northrop, Lockheed Martin, Boeing and General Atomics Aeronautical Systems are vying to build the flying gas station, which is expected to reduce dependence on Boeing F/A-18E/F Super Hornets for aerial refuelling.

“The real value of this restructure is that it incrementally gets at the manned-unmanned interface and operation on the carrier deck and in the air wing by the mid-2020s,” says Rear Adm William Lescher, navy deputy assistant secretary for budget. “The mission of tanking is going to be critical to making the air wing more effective and projecting power forward, but the long-endurance [surveillance and targeting] is going to be critical as well. The limited strike function adds value.” 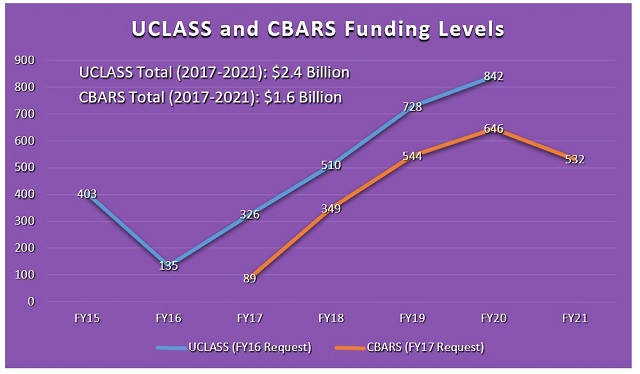