It is 2011, 100 years after the first aircraft landed on a ship, and Northrop Grumman's X-47B is on final descent to the US Navy aircraft carrier USS Harry S Truman, cruising off the Atlantic coast. The kite-shaped flying wing has no tail - and no cockpit.

With the landing signal officer poised to wave off the aircraft if it deviates from the approach path, the unmanned air combat system demonstrator crosses the carrier's stern and catches the arresting wire, decelerating sharply before snapping back, dropping the wire and taxiing clear. 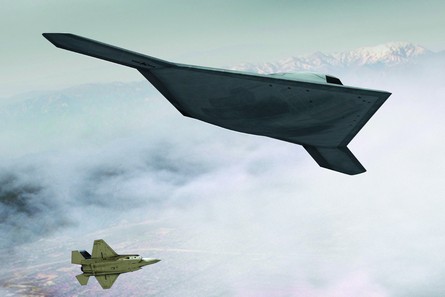 N-UCAS would operate from carriers alongside F-35s   © Northrop Grumman

But it will take more than one successful trap to secure a place for unmanned combat aircraft on crowded US Navy carrier flightdecks. Northrop must demonstrate that N-UCAS can fit in alongside manned aircraft without impacting the carrier's precisely orchestrated operating cycle.

"There is no community pulling this into the navy today," says former admiral Tim Beard, Northrop's lead for X-47B carrier integration. "Our goal is to create interest within the navy in the ability to stand off and maintain orbits out there for 50h-plus."

The US Navy has not had a long-range strike aircraft on its carrier decks since the Grumman A-6 was retired in 1997 without being replaced following cancellation of the stealthy A-12. The result has been a dramatic decrease in the reach of US carriers, says the Center for Strategic and Budgetary Assessments (CSBA) , a Washington, DC-based think-tank and N-UCAS proponent.

"An unmanned aircraft provides a massive increase in mission endurance, to 50-100h," says Winship. In N-UCAS, this persistence is combined with all-aspect, broadband low-observability to enable the aircraft to penetrate defended airspace and stay there to perform surveillance and strike missions.

But to realise this potential, Northrop must first prove it can integrate an autonomous vehicle into carrier operations and land a tailless aircraft on the flightdeck at sea. That is the intent of the UCAS-D demonstration programme, which the USN describes as a "critical step toward F/A-XX", its notional next-generation strike platform. 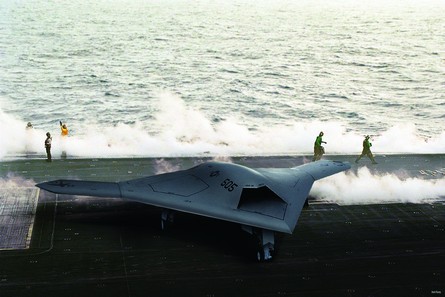 Northrop was awarded the six-year, $636 million UCAS-D contract in August 2007 after its X-47B was selected over Boeing's X-45N. The first of two demonstrators is scheduled to fly in November 2009, and the first carrier landing is planned for 2011.

J-UCAS was cancelled early in 2006 after the USAF withdrew, and the programme was transferred to the USN and reduced to the demonstration of a carrier-suitable, low-observable unmanned combat aircraft.

"We've been working on this for seven years," says Winship. "Over $800 million was invested in J-UCAS, and Northrop Grumman has always been pushing towards the navy requirement." Under UCAS-D, the company will complete the two X-47Bs begun for J-UCAS, with the first air vehicle, AV-1, already in the final stages of assembly at its Palmdale, California plant.

"There is no change in the vehicle from J-UCAS," he says. Although not required for the baseline UCAS-D programme, the demonstrators will be equipped for air-to-air refuelling, and have space and weight provisions for sensors and weapons. Northrop hopes this additional capability will be tapped as the demonstration progresses.

The demonstrator has bays for sensors and weapons, each of the latter sized to carry a 900kg (2,000lb) Joint Direct Attack Munition or six 150kg Small Diameter Bombs. That would give an operational N-UCAS, with its 12-14h unrefuelled endurance, the capability to attack 12 different targets on a single mission, says Beard.

The weapons bays could accommodate electronic attack, electronic intelligence or signals intelligence payloads, he says. Alternatively, each could house a 2,270litre (600USgal) fuel tank, allowing the N-UCAS to be used as a carrier-based aerial refuelling platform. "That gets the F-18 guys interested," says Beard, as the tanking mission is currently performed by F/A-18E/Fs equipped with buddy refuelling pods.

UCAS-D aims to prove a highly stealthy aircraft can land on a carrier. Low observability from all directions, across a wide range of frequencies, requires an aircraft with no vertical features, and an unmanned vehicle allows that, says Winship. Tailless aircraft require a high angle of attack on landing, and with an unmanned vehicle "there is no problem with vision over the nose", he says.

Maximum launch weight is 20,190kg (44,500lb) and maximum carrier landing weight 10,670kg. Mission requirements for the demonstrator include a 90min loiter time within the carrier control area at 280km (150nm) radius, and the endurance to perform eight bad-weather carrier approaches.

AV-1 is to be completed and ready for proof-load testing by mid-2008, beginning an extended period of ground testing leading up to a first flight in November 2009. "It's a pretty slow pace compared to what we could do," says Winship. Paced by funding, assembly of AV-2, the second demonstrator, will begin after AV-1 taxis. "We will use all of our 2008 funding for ship 1," he says.

Technically, the "long pole" in the UCAS-D programme is validation and verification testing of the X-47B's failure detection and accommodation logic, says Winship. To provide robust flight control in order to ensure safe integration with carrier operations and manned aircraft, Northrop must demonstrate the unmanned vehicle can withstand first and second like and unlike failures.

System capability is being developed in blocks. AV-1 will fly first at Edwards AFB in California with Block 1 software for airworthiness testing and envelope expansion. The vehicle will then cross the country to the US Navy's test centre at Patuxent River, Maryland for Block 2 testing, including land-based catapult launches and arrested landings.

In the first half of 2010, AV-1 will be taken to Norfolk in Virginia and hoisted aboard the carrier for checkout. Then the demonstrator will deploy to NAS Lakehurst, New Jersey for Block 3 full catapult compatibility testing, including steam ingestion trials. Returning to Pax River, AV-1 will join AV-2 for the work up to Block 4 shore-based sea trials, These will precede the first carrier deployment in October-November 2011 for full-scope integration testing at sea. 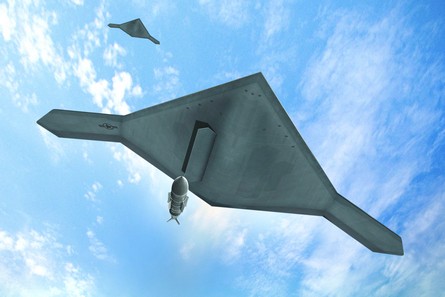 X-47B has the capability to carry weapons    © Northrop Grumman

To be conducted while the aircraft carrier is working up for deployment, the at-sea trials are planned for Truman, but there are other windows of carrier availability before the scheduled end of the UCAS-D programme in 2013. Northrop is developing a mission control element (MCE) that can be integrated into the carrier's combat information centre (CIC), while a second MCE will be housed in a shelter for shore-based operations.

To the carrier, N-UCAS will be just another aircraft, and UCAS-D must demonstrate that an unmanned vehicle can adapt to the specialised carrier operating procedures developed over decades the US Navy, rather than the other way round.

The demonstration will focus on operations within the carrier control area, the 200nm (360km)-radius block of airspace managed by the carrier air traffic control centre. At 200nm, says Beard, the X-47B will transmit data including its fuel status to the CATCC for display alongside manned aircraft. From 200nm to 50nm, software will generate vectors to flow the aircraft in. "UCAS will be in amongst the gaggle," he says.

At 50nm, the X-47B will couple to the ship's landing system and begin its recovery to the carrier. At 3.25nm, the aircraft will tip over on to a 3.5º glideslope. At 0.75nm, if everything looks good, the landing signal officer will clear the aircraft to keep coming.

Using precision ship-relative GPS, the autonomous aircraft is expected to touch down with lateral and longitudinal dispersions measured in inches. In thousands of simulations, Beard says, the vehicle safely hooked the second, third or fourth wires. Carrier pilots are trained to aim for the third wire.

There are two landing logics: bolter and trap. When the vehicle senses weight on wheels, it will increase power and reconfigure controls ready for a bolter if it misses the wires. But if it senses the deceleration of an arrested landing, it will retard the engine to idle and control will transition from the mission operator in the CIC to the deck officer.

Manoeuvring the X-47B around the flightdeck, on and off the elevator and inside the hangar deck will also be key aspects of the UCAS-D demonstration, as the navy cannot affort to clear the decks every time an unmanned aircraft is moving.

Success for the UCAS-D programme will be proving that an unmanned combat aircraft can be intregrated with manned aircraft operations within the carrier's rigidly controlled airspace and on its tighly constrained flight and hangar decks. Success will also be persuading the navy to take the next step - development and procurement of a potential 70 N-UCAS to equip its carriers later next decade.

To read more about "a day in the life" of the Naval UCAS, read Graham Warwick's blog.

Click here to see a Northrop Grumman video of the N-UCAS in operation.