To get a sense of the challenge in designing the European Space Agency’s Solar Orbiter mission, consider that the surface temperature on the planet Mercury gets up to 427°C – nearly twice the melting point of tin. Now, go a bit closer until the Sun is just 42 million km away, and the temperature on the Sun side of Solar Orbiter’s heat shield will be 600°C.

That close, and Solar Orbiter’s instruments will be able to observe our star with unprecedented detail while taking measurements of the flood of highly charged particles passing by – measurements which can be compared with those taken by solar observatories in the relatively benign environment of Earth orbit, another 110 million km distant.

Unfortunately, to take those measurements will mean opening hatches in Solar Orbiter’s heat shield, to let some of that flux inside, to pass its instruments before being carefully vented out the sides of the spacecraft. And, to get that data back to Earth, the spacecraft’s high-gain antenna will have, sometimes, to poke its head out from behind the shield.

Meanwhile, any space mission has to stay pointed at its target – the stars, the Earth, Mars, whatever – but for Solar Orbiter, pointing is mission-critical. According to Tim Harris, deputy project manager for prime contractor Airbus Defence & Space, if Solar Obiter diverges more than 8° from straight-on the Sun’s blast will fry the mission. So, with periods of up to a month with no Earth contact, this spacecraft will have to be able to auto-control like nothing before it. Harris says the pointing system is not unusual, but it is designed to be supremely robust and accurate. It had better be.

From launch – by an Atlas V rocket from Cape Canaveral in October 2018 – Solar Orbiter will take three years to reach is orbit around the Sun. Slowing down enough on the way in makes a mission to Mercury, Venus or in this case the Sun itself harder than going out, say to Mars.

To get there – and end up where it needs to be – Solar Orbiter will first have to fly away from the Sun, to a distance of more than 200 million km (about 1.4 times the average distance between Earth and the Sun) before swinging back in, taking a series of gravity assists from the Earth and Venus. During that cruise phase, mission scientists will be trying to get as much data as they can from Solar Orbiter’s 10 instruments. 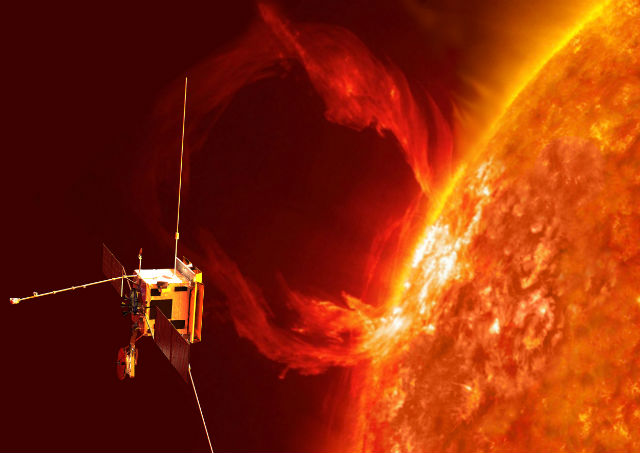 But the real data gathering begins once on station, where the nominal mission life will be three years, followed by another three or four if budgets allow. As Solar Orbiter goes round the Sun, each time it lines up with Venus it will get a bit of help to raise its orbit off the ecliptic plane, on which the planets lie. Ultimately, the spacecraft will go as high as 30° - high enough to see the Sun’s poles, which will be an exciting scientific first.

Tim Horbury, a physics professor at Imperial College in London and the principle investigator on one of Solar Orbiter’s instruments, which will measure the magnetic field local to the spacecraft itself, says the opportunity to compare measurements taken close to the Sun with those taken near Earth will open a new era of solar science. The mission will add a huge amount to what was learned from the 1970s Helios missions by NASA and Germany’s DLR space agency – which naturally had lower resolution and none of the backup of Earth-orbiting infrastructure.

In fact, the data stream coming in will be about as energetic as the solar wind itself. Another 2018 launch, by NASA of a spacecraft called Solar Probe, will have two complementary missions on station at the same time. In a highly elliptical orbit, Solar Probe will spend less time near the Sun, but will get closer than Solar Orbiter as it passes, actually dipping into the plasma. The two projects aren’t co-ordinated but, says Horbury, the fact that two ambitious missions should be funded at the same time says a lot about the how much interest there is in solar studies.

But down on the ground in Stevenage, UK, as Airbus Defence & Space gets ready to ship the shock and thermal model of Solar Orbiter to Germany for tests to validate the design against launch and in-space conditions before they set to work building the real thing, Horbury is animated by the very practical matter of spacecraft mechanics – and heat. His experiment will be trying to measure magnetic fields that will be smaller than those generated by spacecraft electronics; a particular worry is the reaction wheels, needed to keep Solar Orbiter pointing precisely towards the Sun.

So, much work has been done – as Airbus’s Tim Harris will attest – to minimise the interference from those wheels which, as spinning metal plates, are natural magnetic field generators. Making them of low-mass aluminium will help reduce those fields, but as Harris notes it also reduces their effectiveness. With an extra year to work – the original launch plan of 2017 was pushed back, to improve the on-board instruments – those reaction wheels got plenty of extra engineering attention. Now, says Harris, a final design has been “more or less” worked out.

Heat, not surprisingly, is another issue for Horbury. But unlike colleagues whose instruments are to be packed inside the 60°C body of the spacecraft, Horbury’s electro-magnetic sensor will ride on a 3m carbonfibre boom trailing behind. Nicely shaded by the spacecraft and its heat shield, that instrument will find itself at -160°C – and will need to be heated up to work properly.