Aermacchi’s campaign to establish its M-311 basic/intermediate jet trainer as a viable alternative to heavy single-engined turboprops faces a series of key hurdles in the coming weeks, as air force pilots from Australia, Singapore and the UK prepare to evaluate the Italian manufacturer’s avionics technology demonstrator. 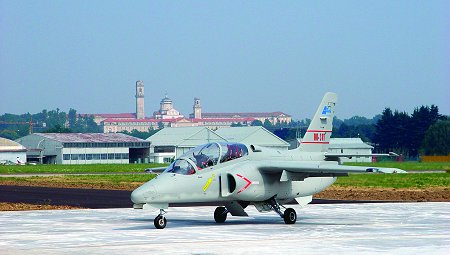 The M-311 – an extensively upgraded version of the S-211 jet trainer that entered service in the mid-1980s – is being pitched by Aermacchi as a better-value alternative to the Embraer EMB-314 Super Tucano, Pilatus PC-21 and Raytheon T-6 Texan II.

This is based on the Fin­meccanica company’s assertion that the life-cycle costs of the jet can be brought into line with those of its turboprop rivals despite a fuel-burn penalty of about 30%. “The direct operating cost is only 5% higher for the jet, taking into account all of the cost drivers,” says Aermacchi competitive analysis director Sergio Coniglio.

The four 3t-class trainers are contesting Singapore’s requirement for a new fleet of leased aircraft for its basic pilot training operations at Pearce airbase in Western Australia (Flight International, 5-11 July). Four Singaporean air force pilots are due to spend a week at Aermacchi’s headquarters at Venegono, near Milan, next month to evaluate the M-311 demonstrator. Responses to Singapore’s invitation to tender are due late next month, with a selection expected by early 2006.

Two Australian pilots will observe the trials, with the country having a medium-term requirement for a Pilatus PC-9 replacement. A week later the aircraft will be flown to Cranwell, UK, for evaluation by Royal Air Force pilots in support of the country’s Military Flying Training System competition. The first production M-311 would fly in late 2007 if it is selected by Singapore, says Aermacchi.

The key to the M-311’s competitiveness against increasingly sophisticated turboprop trainers will be its low maintenance costs, says Coniglio, while its ability to manoeuvre at higher speeds also means that “student pilots will have a much higher skill level when they go to an advanced trainer”.

Aermacchi’s M-311 prototype has flown about 30 times and accumulated around 30 flight hours since its debut on 1 June, and a new software standard will be loaded this week to upgrade the displays in its CMC Electronics-equipped cockpit.

A second aircraft – also built as a technology demonstrator in the mid-1990s – is due to fly in late 2006, incorporating most of the design features of the proposed series-production model. Changes from the baseline S-211 will include upgraded systems to increase time between overhaul and reduce turnaround time between sorties, extended fatigue life and a Pratt & Whitney Canada JT15D-5C turbofan engine.