The Pentagon has reduced aviation procurement by 7.2% to $45.3 billion in its fiscal year 2017 budget submission compared to the $48.8 billion requested last year.

This lower funding level buys eight fewer fixed-wing aircraft including five Lockheed Martin F-35As and three C-130Js for the US Air Force and 35 fewer rotorcraft for the Army and Navy than are afforded in the current budget, according to US Defense Department (DOD) officials.

The budget does protects other high-priority air force procurements including the Boeing KC-46A and Northrop Grumman Long-Range Strike Bomber. 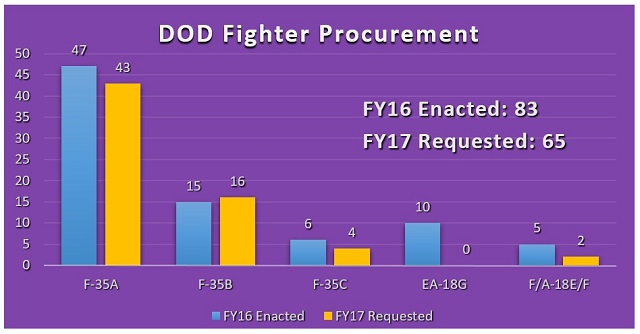 Sent to Congress on 9 February, the total $582.7 billion spending proposal would fund the US military through 30 September 2017. The amount conforms with a bipartisan budget deal that passed late last year and is, therefore, $17 billion below projected spending levels in last year’s request.

Deputy secretary of defence Robert Work says in crafting the budget, the Pentagon focused on shape, not size and modernisation versus readiness for today's conflicts.

The budget has been designed to offset perceived threats by Russia, China, Iran, North Korea and global terrorist organisations that are running amok in Iraq, Syria and now Libya.

The deputy secretary foresees a return to “large power competition” over the next 25 years, similar to the conditions seen during the Cold War, but global terrorism remains a long-term threat.

Work expressed particular concern about Pyongyang’s pursuit of the KN-08 intercontinental ballistic missile that would be capable of reaching the US mainland if successfully fielded. He notes that Russian and China are pursuing advanced military capabilities to counter America's strengths.

Work warned that the current plan requires significant new funding in fiscal year 2018 after the budget agreement reverts back to enacted sequestration levels, which passes many of the toughest budget tradeoffs and decisions to the next administration in 2017. 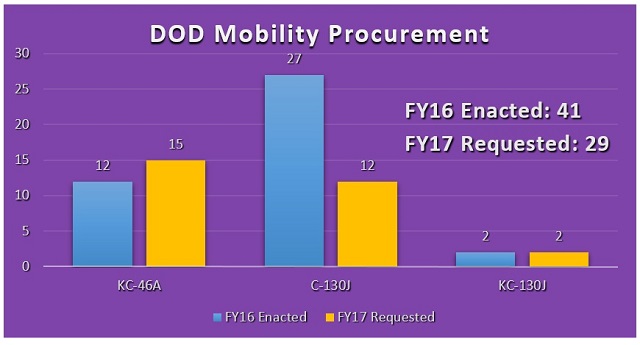 For the services, the navy has proposed deactivating its 10th Carrier Air Wing at Naval Air Station Lemoore in California and will spread its remaining aircraft among the other carrier air units to boost readiness.

The service is requesting $14.1 billion for the procurement of 94 aircraft in 2017, down from 153 in 2016, reflecting the end of Lockheed MH-60R procurement and other reductions. The navy requests 41 fixed-wing aircraft, 42 rotorcraft and 11 unmanned aircraft in 2017.

The air force’s aircraft procurement account took the biggest hit in the budget at $13.9 billion compared to $15.8 billion in fiscal 2016 — a 12% reduction. The service shifted 45 F-35 procurements out of its five-year funding profile, the equivalent of four fighter squadrons. Instead, it will spend $3.4 billion to keep the Fairchild Republic A-10 operational through 2021 and the planned retirement of the EC-130H Compass Call has also been delayed to meet persistent operational demands.

“The decision to delay modernisation was taken in order to pay for capacity and readiness for today’s fights,” according to a statement from the air force. “These deferments are not programme cuts; the air force programme of record remains 1,763 aircraft for the F-35A.” 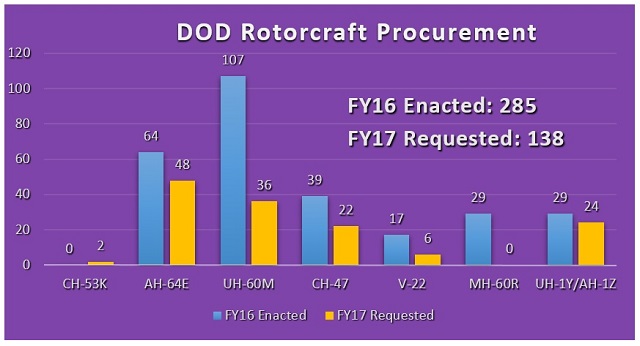 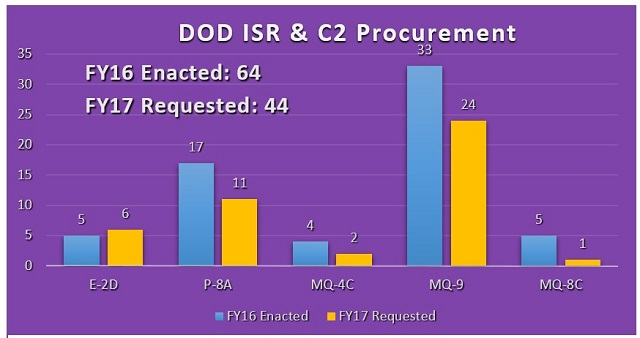