Flight soars into its fifth decade

The 1950s was an incredibly significant decade both for aviation and for Flight. The Comet heralded the jet age – albeit a hesitant one – while Flight celebrated half a century of aviation publishing.

It was also the decade that Flight’s longest-serving scribe joined the team – “Uncle” Roger Bacon and his Straight & Level diary column. 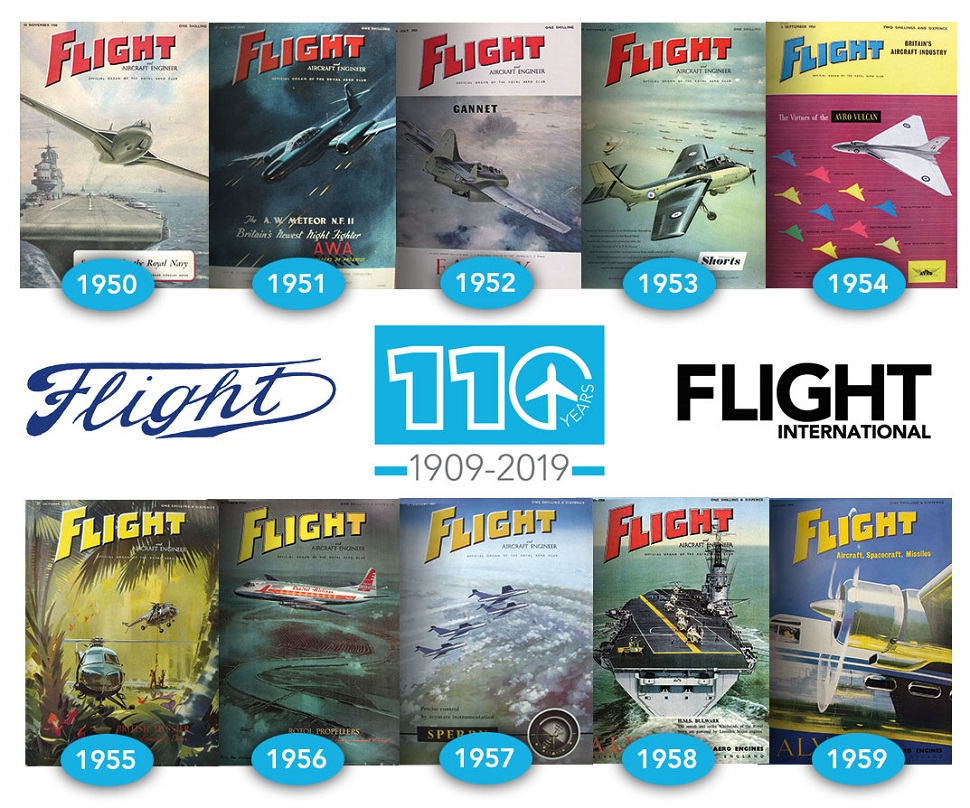 Bill Gunston, renowned aviation writer and Flight’s technical editor, recalled for our centenary issue in 2009 how the 1950s was a formative decade in the post-war era: “Led by Maurice and Rex, Flight’s team of young editorial men, almost all of them pilots, built up such a customer base that the long-time rival, The Aeroplane, first changed to Commercial Aviation News and then went out of business.”

“JM” Mike Ramsden, who joined the editorial team in 1955 and subsequently became one of our distinguished editors, recalled for the centenary celebration issue that “Maurice was often away flying new aircraft for our “In The Air” series or testing the latest Ferrari in Monaco for our sister weekly, Autocar.” As a result, Ramsden recalled that King was the “de facto boss”.

In May 1952, BOAC inaugurated the era of jet transportation with its first Comet flight. Sadly, the era came to an abrupt halt two years later when the Comet was grounded after a spate of mysterious mid-air accidents. Gunston recalled his colleague, Ken Owen’s coverage of the special inquiry into the accidents, which began in July 1954 and lasted another three months.

Gunston, who sadly passed away in 2013, recalled how Flight marked the coronation of Her Majesty Queen Elizabeth II “by visiting every RAF command, which then extended to many parts of the world, finally producing its first issue thick enough for ‘square-back’ binding – and with a gold front cover”.

Gunston said the cancellation in November 1955 of the RAF’s Vickers-Armstrong V1000 long-range jet transport upset the Flight team: “In those days Flight relied totally on its advertisers, and each evening let off steam in the Brunswick Arms pub next door [to Flight’s Dorset House headquarters], releasing the frustration at being careful what appeared in print.”

Flight’s coverage of US military programmes generated some unwanted attention in 1955, with a feature on North American’s F-100A Super Sabre, including a detailed cutaway drawing.

“Soon afterwards Dorset House was visited by a Special Branch policeman, accompanied by an American,” recalled Gunston. “I explained at great length how everything had been based on published information, the cutaway relying largely on small photographs in advertisements. Soon ‘probes’ became a regular Flight feature, thanks to diligent research by such artists as Arthur Bowbeer, Frank Munger and, later, John Marsden.”

A tour by Gunston of the US aircraft companies in mid-1955 would set a precedent that continues to this day. “I met almost every big name in the business, including Hall Hibbard of Lockheed, George Schairer of Boeing, Donald Douglas Sr and top Douglas engineers Ed Burton and Ed Heinemann,” said Gunston.

“These meetings paved the way for Arthur Bowbeer to pay his own visits and produce the first detailed cutaways of the Douglas DC-7C and DC-8, Boeing 707-120, and Lockheed L-1649 and Electra, for our special Commercial Aircraft issue of 6 July 1956. Since then, not only has it become routine for staffers to ‘cross the pond’, but Flight now has a team based in the USA, something unthinkable in the 1950s.”

Flight covered the unveiling of Lockheed’s U-2 spy plane in February 1957 and was not misled by the US National Advisory Committee for Aeronautics description that it was a general-purpose research aircraft with U standing for “utility”, recalled Gunston.

“Rex King saw through the ruse at once, writing a leading article headed ‘U-2… can be a top security chief.’ He explained that the strange aircraft was clearly designed to carry out clandestine reconnaissance flights at an altitude above that of any hostile fighters.”

In 1957, King became editor (with Smith moving up to editor-in-chief) and held regular “editorial meetings” in The Brunswick Arms, over a pint of pale ale, recalls Ramsden.

“Big ideas took off in the Brunswick. One evening in 1957 Rex agreed to our ideas for a diary column and named it Straight & Level,” he wrote in our centenary issue.

“Edited” by our fictional columnist “Roger Bacon”, Straight & Level offered an offbeat view of the industry and included a zany cast of characters such as marketing man Rollo Freelunch, civil servants: Top Kneddy and Bottom Neddy and the pilot’s pilot Capt Speaking, much to the delight of thousands of “Nephews” and “Nieces”. The spirit of Uncle Roger lives on in today’s Straight & Level page, and he still makes his annual return in our festive quiz.

The close of the decade saw Flight marking its half-century along with a tweak to its name. Gone was the long-standing “and Aircraft Engineer” suffix, replaced by “Aircraft, Spacecraft, Missiles”, reflecting the broadening aerospace sector the magazine was covering.

Flight officially celebrated its half-centenary in its 2 January 1959 issue, marking the occasion with a leader, asking “How Far Have We Come?” which reflected on what our founder-editor Stanley Spooner “would think if he were with us now… About flying, that is, and about Flight”. 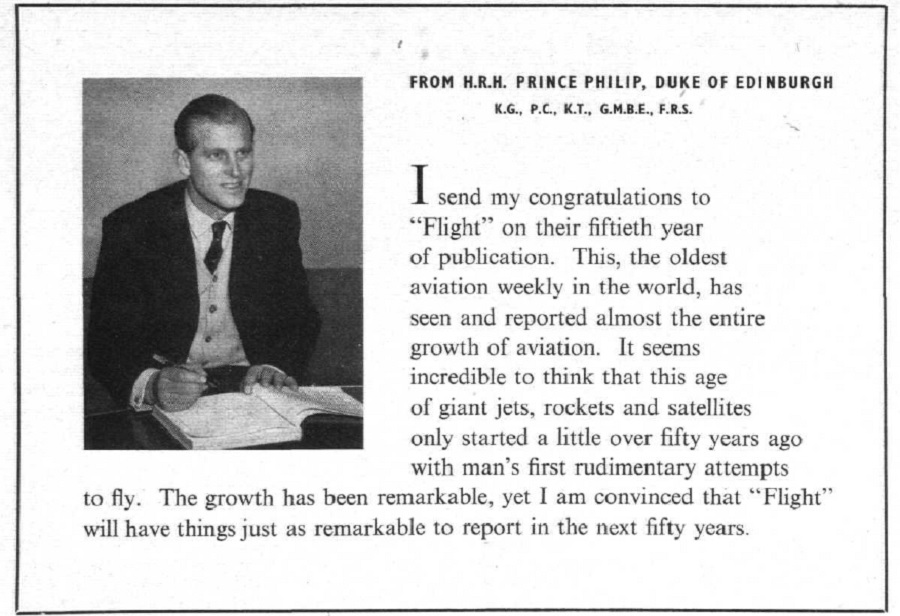 Our celebratory issue included a congratulatory message (above) from avid aviator HRH Prince Philip, the Duke of Edinburgh, which concluded: “The growth has been remarkable, yet I am convinced that Flight will have things just as remarkable to report in the next fifty years.” 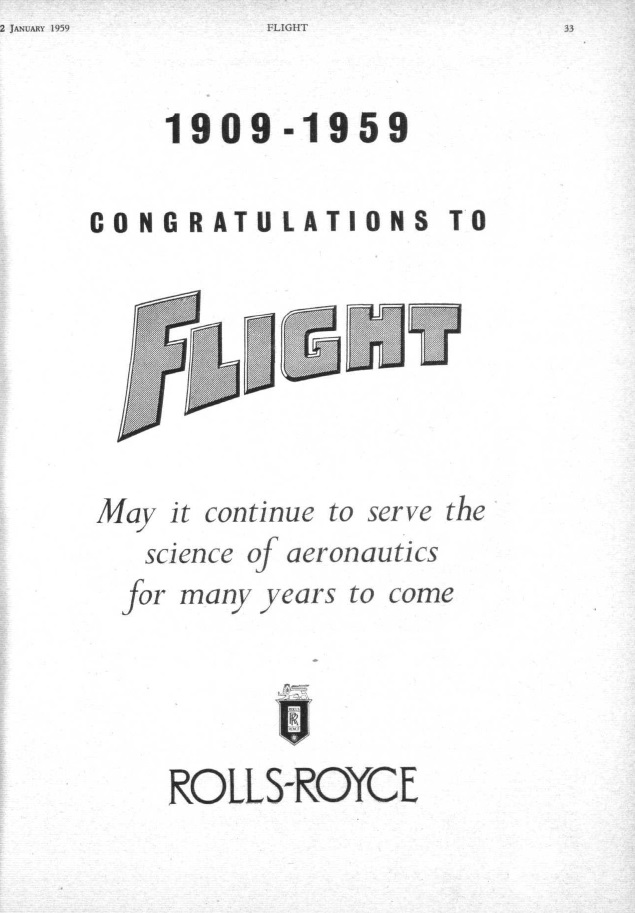 That issue also carried many congratulatory adverts from contemporary manufacturers such as English Electric and Rolls-Royce. A notable one, from Rotol (now the Dowty division of GE Aviation) described Flight as “an invaluable work of reliable reference… to both the student of the contemporary scene and the student of history”, concluding: “Congratulations on a long and successful Flight”. Says it all, really!