As Flight magazine marks its 110th anniversary, we look at the highlights of our fourth decade

With the UK embroiled in war, the doors of Flight’s London headquarters at Dorset House were sandbagged to protect against bombing raids.

Meanwhile the Flight artists led by Max Millar quickly produced a large wall chart of German aircraft that became a popular addition to many bedroom walls.

Reminiscing about Flight for our 100th birthday issue in 2009, former technical editor Bill Gunston (who sadly passed away in 2013) recalled how several editorial staff, including future editor Maurice Smith, “joined up”, appropriately donning the light blue uniform of the Royal Air Force. 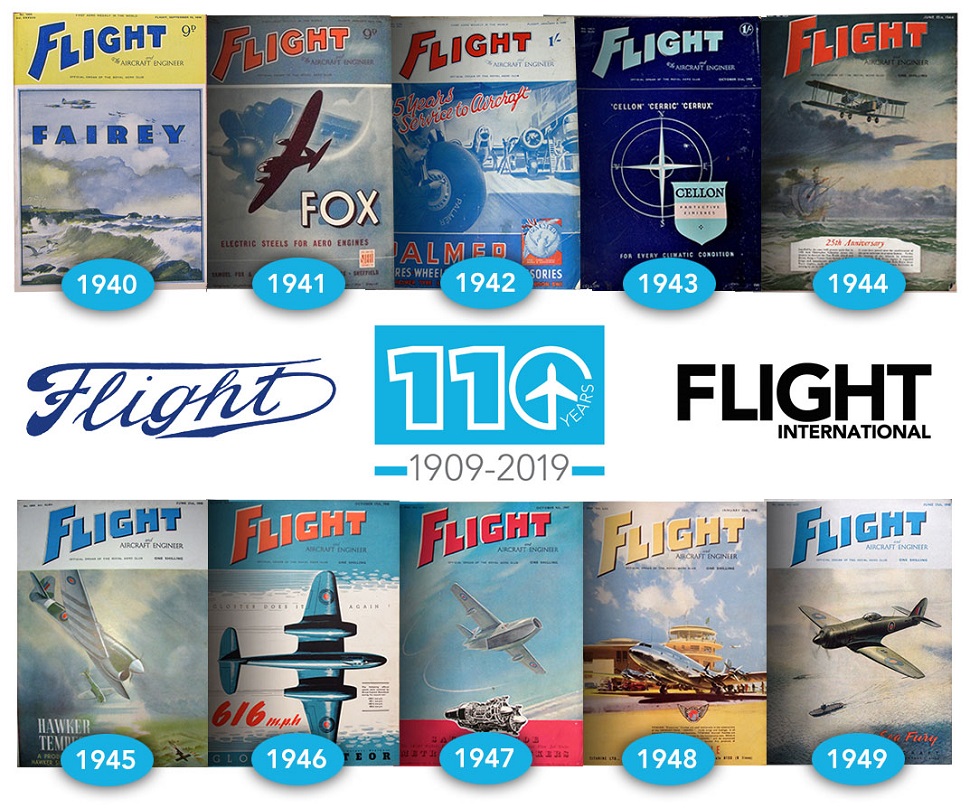 Meanwhile “veteran photographer John Yoxall took on the role of air correspondent, and flew to France, where the activities of the RAF and its Advanced Air Striking Force were covered in detail. In contrast, there were great events taking place in Britain and Germany that went completely unreported,” recalled Gunston.

Our reporting was tightly constrained by the UK Ministry of Information. These reporting restrictions particularly hindered our ability to cover the development and manufacture of new combat aircraft.

When the war in Europe ended in May 1945, Maurice Smith returned from RAF service to Dorset House to be appointed editor. Smith had risen to the rank of Wing Commander, achieving an impressive war record recognised with a Distinguished Flying Cross and Bar.

Early in the decade, Flight, through editorial director Geoffrey Smith (father of Maurice), had learned of the pioneering work by Frank Whittle on jet propulsion, which resulted in a series of ground-breaking articles on this embryonic technology.

As the 1940s drew to a close, turbine technology was central to one of the decade’s biggest aviation stories – the maiden flight of the world’s first jet airliner on 27 July 1949. But the momentous event was missed by all London air correspondents, including Flight’s editor. The de Havilland press officer, unaware of the imminent first flight, sent the gathered press corps home from Hatfield early.