Aeroflot to choose between A350 and 787 this week

Flight International online news 09:00GMT: Next week is expected to see the winner emerge of one of the toughest battles in the war between the Airbus A350 and Boeing 787 when Aeroflot announces which aircraft type it has selected. 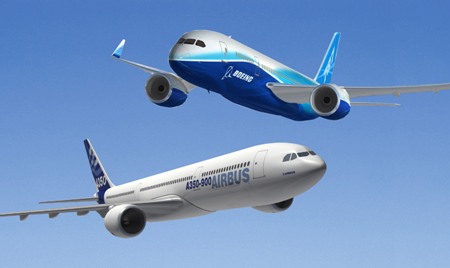 The company is due to reveal the successful bidder on Thursday 3 November, awarding business with a list value not far short of $3 billion.

“We are looking at taking deliveries starting in 2009,” says director for route network management Alexander Kanischev. “Our long-term plan envisages acquiring up to 22 long-range passenger aircraft.”

If the airline decides to go with Airbus, it would have to wait a little longer for first deliveries as the A350 is not due to enter service until mid-2010.

The carrier has just approved the acquisition of 12 more Airbus narrowbodies - five A320s which will be taken on 10-year leases between September 2006 and June 2007 from RBS Aerospace as well as seven A321s directly from Airbus.

Airbus, its primary parent EADS, and Boeing have invested heavily in Russia in recent years and Airbus is offering A350 manufacturing work to Russian companies for the first time.

A wrinkle in the story, however, is that Aeroflot is simultaneously looking for replacements for its four leased McDonnell Douglas DC-10-40 freighters and would like to secure hard-to-find Boeing MD-11s for that role.

Cargo division director Igor Desyatnichenko indicates that that could play a role in the outcome.