Airbus is to use an A380 as the flight-test demonstrator for a future hydrogen-fuelled engine, to be developed under a co-operation with CFM International partners Safran and GE Aviation.

The demonstrator will be based on the MSN1 airframe, which was used for A380 certification flights and served as a testbed for A350 engines.

She says it will have a support installed on the external fuselage, on which the propulsion system – based on the GE Passport turbofan – will be mounted. The US-built engine was chosen for its size, advanced architecture, and fuel-flow capability. 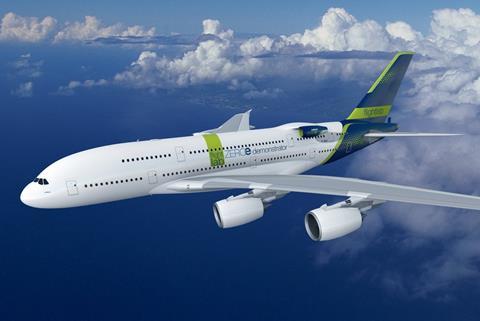 Inside the cabin four hermetically-sealed liquid-hydrogen tanks will be fitted, carrying 400kg of the fuel, along with a distribution system to convey the fuel to the engine.

The A380’s cockpit will be modified with an additional throttle system to manage thrust of the hydrogen engine, along with a dedicated display to monitor performance.

Instrumentation will also be fitted to enable flight-test engineers to gather data during flight and telemetry equipment will transmit information to the ground.

“We want to learn whatever we can learn from operations in real flight and on the ground,” says Klauke.

She says the company is “starting to mature the technological bricks” and plans to fly the demonstrator by the end of 2026.

Airbus Americas chief Jeff Knittel says the partnership with Safran and GE marks a “truly historic day for aviation”, following the airframer’s unveiling of its various ’ZEROe’ liquid hydrogen concept aircraft in September 2020 – with a view to entry-into-service in 2035.

Knittel says that collaboration with industry partners has been “fundamental” to the ambitious target. 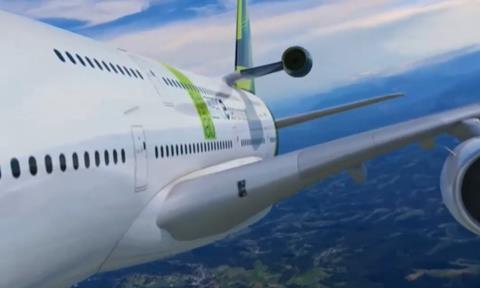 Airbus aims to fly the testbed around 2026

“The goal of the industry is not only to lower the carbon footprint, it’s net-zero carbon emissions,” he says. “We need to explore all technological paths at our disposal. Liquid hydrogen brings great promise.”

Meheust says the Passport engine is “absolutely representative” for the tests, adding that the CFM Leap powerplant could have been used, but this would have required more structural modification to the A380.

“It made a lot of sense to use the Passport in that respect,” he says.

Airbus says its facilities in France and Germany will prepare the hydrogen tanks, and oversee flight testing, while CFM will modify the combustor, fuel system and control system of the engine.

Klauke says the airframer’s zero-emissions development centres are looking at options for the tank construction, including whether they should be built from metal or composites.

She says the demonstrator is part of Airbus’s overall research and development plans, but the company is not disclosing the specific quantity of investment required.