Airbus chief executive Guillaume Faury has reiterated the need for a negotiated settlement to the long-running transatlantic subsidies dispute, as the US government – in the final days of the Trump administration – prepares to put further sanctions in place.

Speaking as the airframer unveiled its full-year 2020 order and delivery performance, Faury described as “unhelpful” the administration’s continuing antagonism, illustrated by the recent broadening of the scope of tariffs.

The Office of the US Trade Representative is to apply tariffs from 12 January to additional aerospace products including fuselages and fuselage sections – irrespective of whether they are fitted with interiors or systems.

It also covers wings and wing assemblies, other than those with exterior carbon composite structures, as well as vertical fins and horizontal stabilisers.

The formal notice does not include subassemblies imported unattached to the fuselage or wing, including flaps, rudders or elevators.

Airbus transports fuselages, wings and other sections for its A320neo family from industrial sites in Europe via ship to the US Gulf Coast where they are assembled at its Mobile plant. 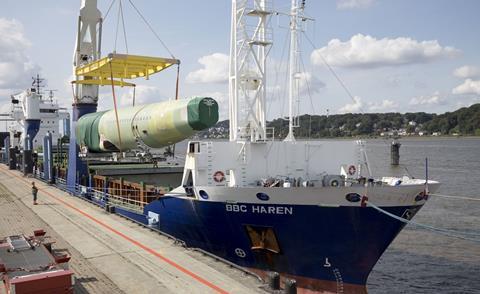 Both the US government and the European Union have been granted authorisation to impose tariff-based countermeasures – respectively for $7.5 billion and $4 billion – by the World Trade Organization.

The latest US sanctions follow irritation by the Trade Representative over the way the European Union has calculated its penalties on US imports. The US side has argued that the EU used a distorting timescale and also did not account for US exports to the UK, which was withdrawing from the EU trade bloc.

When the dispute was initiated in 2004, US president George W Bush was in power. But it persisted through the Democrat administration of Barack Obama and outlasted the Republican term of Donald Trump – on whose watch the case turned from a legal argument into one with financial consequences.

Delays to the WTO’s consideration of the European case meant its clearance to impose penalties on imported US aircraft coincided with Trump’s defeat in the presidential election to Joe Biden.

Biden might be less impulsive, but no-one should expect much concession from his administration. Neither Ron Kirk nor Michael Froman, who each served as US trade representative under Obama, adopted less than a bellicose stance on the matter. Kirk had spoken of there being “simply no justification” for Airbus subsidies, while Froman had previously stated that the US side would “not tolerate” its rival’s “ignoring the rules”.

Biden’s transition team describes Tai as having spent her career “working to level the playing field for American workers”. She has been particularly active in China trade enforcement, with roles including litigation of US disputes against China at the WTO.

Tai will face a different scenario in the Airbus-Boeing dispute to that of previous trade representatives, one which will demand a willingness to negotiate if the two sides are to avoid a drawn-out arms race of tariffs and counter-tariffs and establish a mutually-acceptable framework for fair competition.

While the US side, with the upper hand, is unlikely to brush away a 16-year fight – which it started – simply to demonstrate moderation after four years of Trump turbulence, the fact that both rivals have been prepared to address the main points of contention, rescinding tax breaks and relinquishing launch aid, suggests such an agreement is within reach, despite the latest development.

The UK will no longer be dealing with the US government as part of the EU, and has suspended tariffs on Boeing aircraft – although the Office of the US Trade Representative argues that the UK could not continue to impose them anyway, because the subsidy case brought against Boeing was through the EU.

“We reserve the right to apply independent retaliatory tariffs if sufficient progress is not made in negotiations,” the UK government counters. “We will not hesitate to exercise our WTO rights in the interest of protecting British businesses and industry.

“As an independent trading nation, we have the ability to shape these tariffs to our interests and our economy, and to stand up for UK business.”

But the government stresses that it is “serious” about de-escalating the Airbus-Boeing conflict and achieving a “swift and balanced settlement”.