Airbus has embarked on a programme to build a powertrain demonstrator showing the potential of cryogenically-cooled superconducting materials to reduce weight and improve the efficiency of power conversion for electric propulsion.

Electric propulsion prospects have focused on light and regional aircraft because the power demanded for larger, longer-range types cannot be achieved without installing prohibitively-heavy systems and generating greater quantities of heat.

But the shift toward electrical designs raises the possibility of using low-temperature superconducting materials to increase power density, enabling a reduction in weight of electric current transmission systems. 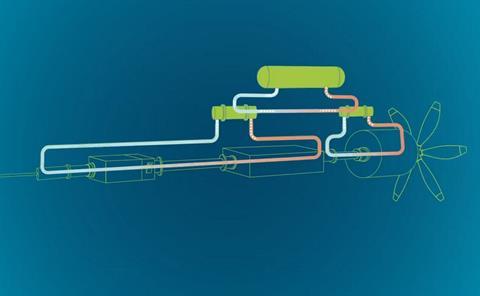 Airbus will design and build the demonstrator over the next three years under a project called ASCEND, led by electric power technology specialist Ludovic Ybanez.

“If we succeed it will be clearly a breakthrough in electric propulsion for aircraft,” Ybanez tells FlightGlobal. “It’s a game-changer for aircraft.”

While there are already propulsion options for lower-power aircraft, he believes the technology will “be an enabler” for high-power designs.

NASA and other research agencies have looked into potential aerospace applications for superconductors and Ybanez says Airbus research has indicated a potential halving of powertrain weight, and electrical losses, and a reduction in the voltage required to less than 500V.

He says the voltage reduction is “very interesting for aircraft” because high voltage presents problems such as arcing and the need for electrical network protection.

Although the weight and voltage reduction hold particular interest, says Ybanez, the potential increased efficiency of the powertrain – perhaps rising by a few percentage points to 96-98% – offers another beneficial aspect of the technology.

“If you want to develop low- or zero-emission aircraft you have to address two main problems: energy storage, and conversion from energy to propulsion,” he says. “ASCEND is focused on the conversion part.”

The project will explore development of a “generic” powertrain, he says, in the 500kW range.

“We want to do that because the objective of the project is not to be specific to an aircraft [type] but demonstrate the feasibility and potential of technologies for an aircraft application,” he adds, pointing out that a light vertical take-off aircraft might require “a few hundred kilowatts” but a long-range aircraft would need “multi-megawatt” power generation. 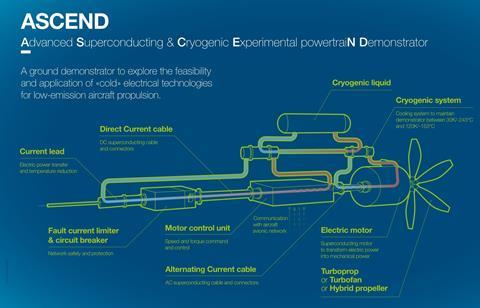 The ASCEND powertrain would include a transmission system, taking electrical power via superconducting cables and connectors through various stages to a motor control unit and then, with DC power converted to AC, a superconducting motor to generate mechanical thrust.

Alongside this transmission system a cryogenic system would provide cooling to the superconducting components.

Airbus has already started exploring the possibilities presented by liquid hydrogen as a fuel for future zero-emission engines.

Liquid hydrogen, which exists at temperatures of around 20K (minus 253°C) offers a source of cooling for a superconducting circuit. Since liquid hydrogen has to be heated from this temperature for injection into a fuel cell, using it as a heat-exchanger to cool a cryogenic powertrain would be a “win-win situation”, says Ybanez.

But he points out that there are safety issues with distributing liquid hydrogen which Airbus wants to avoid.

ASCEND will look at another scenario, without liquid hydrogen on board, with a neutral coolant such as liquid nitrogen or helium.

Ybanez adds that, although the overall superconducting system needs to be cold, around 30-50K, the different components of the powertrain might require individual temperatures – perhaps 80K for cables, 100-150K for conventional semiconductors – and the project will look either at changing the temperature of liquid hydrogen or developing specific cooling systems for certain components.

ASCEND will investigate feasibility of the system to “identify potential show-stoppers and kill them – or kill the project”, he says, and analyse whether the overall system performance benefits from the technology.

Ybanez is encouraged, however, by initial research results such as those regarding the behaviour of semiconductors at low temperatures.

Airbus, through its UpNext future technology subsidiary, will construct the powertrain demonstrator at its E-Aircraft System House outside Munich, and test solutions that can be adapted to a range of engines – turboprops, turbofans and hybrid propeller powerplants – by the end of 2023.

“The importance of this work can’t be understated,” says UpNext chief Sandra Bour Schaeffer. “Cryogenic and superconducting technologies could be key enablers to enhancing the performance of low-emission technologies, which will be essential to achieving our ambitious decarbonisation targets.”

Ybanez says that, once the powertrain demonstrator is complete, it will enable decisions to be made on whether the technology is sufficiently mature to develop a specific powertrain for flight testing.

Some of the technology – such as that used in terrestrial applications – is already available, and part of the strategy will focus on how to integrate it into aircraft, while Ybanez believes other aspects could be ready by around 2030.