One of the Airbus A321neo fuselage sections previously intended for delivery to South American operator LATAM has instead been supporting the A321XLR development programme as a system integration platform.

Originally a standard A321LR centre and aft section, the fuselage of MSN8531 was withdrawn from the Hamburg Finkenwerder production line and effectively de-equipped – its pre-installed systems removed in order to fit new ones specifically for the A321XLR.

Airbus describes the fuselage section as a “pre-industrial system accelerator” – or PISA – a hybrid capable of supporting both A321LR and A321XLR interior configurations on the main deck while specially-developed systems for the A321XLR are installed on the lower deck.

Modifications to be considered for the accelerator naturally include the large rear centre tank which will provide the fuel capacity for the A321XLR’s range, as well as a new 300-litre waste water tank, electronic rudder system, modified fuel lines and hydraulics, and changes to the main landing-gear area.

Virtual visualisation technology has been used to explore the fuselage in 3D prior to the physical fitting of the components in the demonstrator.

“The PISA demonstrator embodies the end-to-end process from design changes to industrialisation of the A321XLR,” says the airframer. “It is not just for the ramp-up of the XLR but also for future adaptations and major modifications.”

Airbus head of XLR demonstrators Frank Dohrmann, who leads the PISA project, adds that the demonstrator will provide a training facility for workers to aid manufacturing of the flight-test aircraft as well as the heads-of-versions for customers. 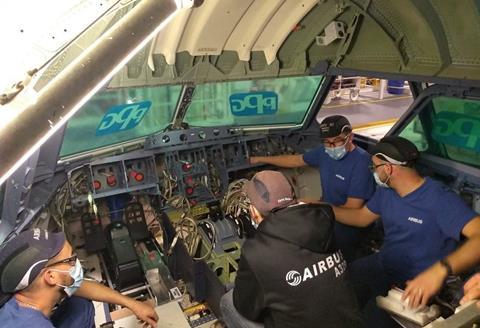 The A321XLR development effort is being supported by other demonstrators and validation platforms aimed at de-risking the programme, which remains a central part of Airbus’s post-crisis recovery strategy.

Another A321neo fuselage section, the nose of MSN9893, has been adapted, at a new industrial maturity centre on the Saint Nazaire, site into a physical mock-up to support changes to the A320neo family – including the XLR.

It is already being used to test integration of a new main instrument panel which will become a standard for the family.

Other evolutionary changes will be integrated initially into the mock-up, he says, allowing the manufacturer to identify risks and potential disruption as well as optimise logistics and tooling placement ahead of production.

A321XLR airframe leader Martin Schnoor says the nose mock-up will be used to analyse structural reinforcement for the new aircraft owing to “different loads” on the forward section, as well as improvements to systems for cabin comfort.

“The [mock-up] gives us the opportunity to bring all modifications together from [the airframe, systems and cabin areas] to confirm the industrial interfaces,” he adds.

Airbus is intending to put the A321XLR into service in 2023, and the aircraft is approaching the assembly phase for major structural components. 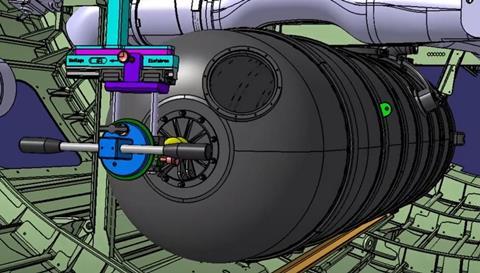 Demonstrators ranging from basic wooden replicas – to verify accessibility for electrical, mechanical, bleed-air and piping installations – to advanced digital augmented reality and 3D printed parts have all been employed to support the XLR’s development.

“Early physical demonstrators and the virtual demonstrators enable us to validate our design decisions and close these topics,” says A321XLR programme head Gary O’Donnell, adding that most of this work was completed in 2020.

The full-scale production standard demonstrators will support industrial process maturity, training, and “help secure our ramp-up”, he says, and will also be used by maintenance and customer-support teams to develop manuals and technical documentation.

“All these demonstrators help us to observe the systems, activities, workflows and premises under holistic real conditions at an early stage before start of production,” says head of XLR equipping Hauke Delmas.

“They provide a protected space for learning and further development. It is therefore possible to learn from mistakes on the mock-ups without endangering production or safety.” 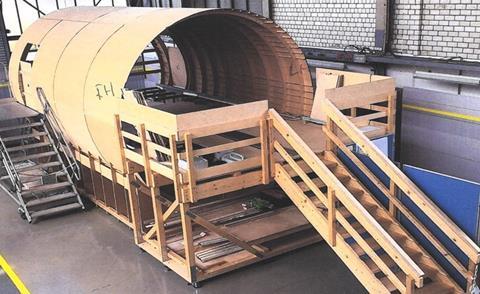