As NASA confirms the successful first flight of its ‘Ingenuity’ rotorcraft on Mars, Russian scientists are proposing that unmanned aerial vehicles be deployed as part of a planned mission to Venus.

Space agency Roscosmos is planning to launch the Venera-D mission towards the end of this decade, which would mark the first landing on the planet since the Soviet era.

The Moscow Aviation Institute says one option to carry out the planned surface and atmospheric studies is to use drones to obtain data on cloud layers at different altitudes or explore specific areas of surface interest.

The presentation outlined the prospects for developing a 15kg multi-rotor vertical take-off aircraft capable of lifting 60% of its weight as a payload, but with dimensions small enough to fit into the Venera spacecraft. 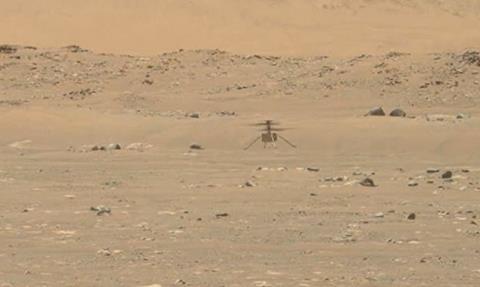 One or several such rotorcraft could be placed within a spherical descent vehicle similar to the Vega craft used for Venusian landings in the mid-1980s, which carried balloon probes for transmitting data.

“The design of the Vega-type machine allows up to seven multi-rotor aircraft to be deployed to the Venusian atmosphere at the same time,” says Yatsenko.

Initial work to configure a descent vehicle, including options for hosting and deploying the rotorcraft, has been carried out by the authors of the proposal.

The next stage will involve carrying out more in-depth studies to consider the choice of suitable manufacturing materials and instrumentation payload candidates – such as physical and chemical analysers, video cameras, and ground-penetration equipment.

“After solving these problems, creation of a prototype is planned,” says the institute.

NASA conducted the historic rotorcraft flight on 19 April, 60 days after the ‘Perseverance’ rover touched down on the Martian surface on 18 February. The 1.8kg helicopter climbed to about 10ft from the surface, hovered and rotated, before landing.