Characteristics of a proposed Russian 50-seat twin-engined turboprop are being refined after a series of windtunnel tests which to explore configurations including a potential external cryogenic fuel tank.

The light convertible aircraft – intended to operate with both passenger and freight layouts – has been subjected to a series of tests to explore different options.

These include variations of the vertical fin, wing-fuselage fairings, landing-gear fairings, and the engine nacelles, aimed at reducing drag in cruise and improving fuel efficiency. 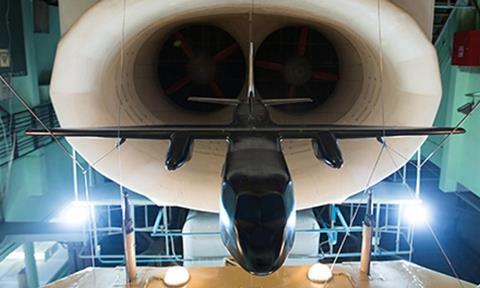 Several tests, including those for icing behaviour, have been carried out on the proposed model

“Test results show the modifications to the model’s configuration gave the expected increase in aerodynamic characteristics,” the institute adds.

It says tests scheduled for 2022 will look further into the proposed aircraft’s properties including modifications featuring the cryogenic tank. The design is intended to offer a range of 800nm (1,500km) with 50 passengers or 540nm with 6t of cargo.