Russian analysts are examining ways to reduce the aerodynamic impact of external cryogenic tanks on smaller aircraft types, as it continues work on a proposed 50-seat design.

While cryogenic fuels – including liquid hydrogen and liquefied natural gas – are more environmentally-beneficial, their low-temperature characteristics prevent the use of normal fuel tanks.

Installation of specially-insulated, high-volume tanks is difficult on regional aircraft, says the Moscow-based Central Aerohydrodynamic Institute, because of limited internal space. But fitting them externally affects controllability and aerodynamic performance.

The institute is studying configurations for a 50-seat light convertible aircraft powered by cryogenic fuel, and determined that a tank around 10m in length and 2m in diameter is required, which would enable flights of 650-1,100nm with a payload of 5-6t.

Two different shapes of external cryogenic tanks – one cylindrical and the other profiled – have been developed for a 1:10 scale model of the aircraft, and subjected to windtunnel tests to assess stability during take-off, cruise and landing. 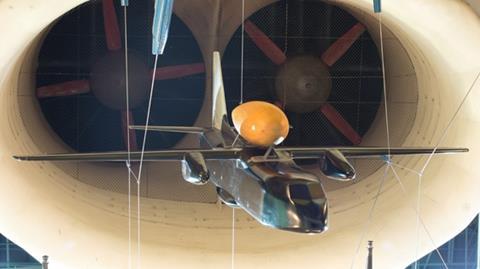 “Specialists investigated the influence of the external cryogenic tank’s shape on rudder authority,” the institute states.

Test results obtained “confirmed the estimates calculated”, it adds, and will be used to develop an optimal design for the cryogenically-powered regional aircraft.

“Use of cryogenic fuel is one of the option for reducing harmful emissions from aircraft,” says Alexander Krutov, a researcher at the institute’s centre for integrated technology.

He says such fuels would also support transport access in remote regions, particularly in northern Russia. “By creating a cryogenic-fuel aircraft, we solve two problems at once,” adds Krutov.