Analysts have embarked on ‘electronic bird’ testing of the Irkut MC-21-310’s interface with its Aviadvigatel PD-14 engines in line with import-substitution efforts.

Foreign-built control panels in the cockpit are being replaced with Russian-produced equivalents, and these are undergoing integration tests, says the state aviation system research institute GosNIIAS.

Substitution has included swapping the cockpit ceiling console, and its control systems, with a version from the Ulyanovsk-based engineering design bureau UKBP.

The testing will explore information exchange between the aircraft and the PD-14 control systems. 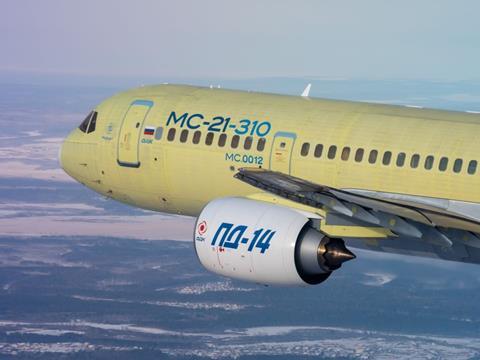 The rig enables repetitive reproduction of engine-control procedures for an entire flight, from start to shutdown.

GosNIIAS adds that it provides a “unique opportunity” to explore the interaction between aircraft avionics and engine electronics in hazardous situations.

The ‘electronic bird’ is also being used to develop an “optimal” and “intuitive” aircraft navigation system interface for the MC-21-310, it states.

GosNIIAS says the work with the rig will “speed up” integration processes for domestically-produced equipment, and enable developers to “find and eliminate shortcomings” with hardware and software before installation.