Airbus has observed a pick-up in engine supply over the past couple of months, but believes broader supply-chain issues will not normalise until at least the middle of next year.

Chief executive Guillaume Faury, speaking during a capital markets briefing on 23 September, said the airframer still had some 26 or 29 “gliders” – completed aircraft still awaiting engines – at the end of the first half.

But this has been “reduced to single digits” he says, adding: “A lot of engines were coming over the summer, engine-makers have fulfilled commitments in the last weeks. 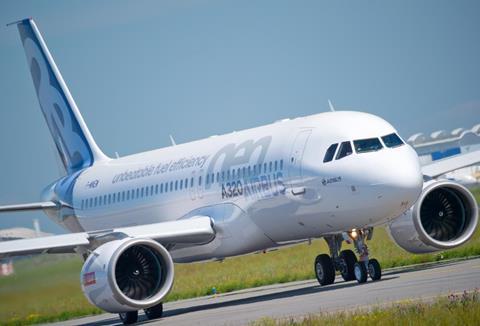 Airbus still has to deliver around 320 aircraft over the last four months of the year to achieve its overall target of 700.

“Based on the visibility we have now from the supply chain, we think it’s manageable,” says Faury. “But I will not tell you it’s easy.

“Like each and every year-end race at Airbus, it’s challenging. We’re on trajectory to get there, but there’s still a hell of a lot of work to be done.”

He says he is “not comfortable” with the situation, but is also not aware of any further crises on the horizon which would jeopardise reaching the airframer’s target.

“It’s not just an end-of-year battle,” Faury points out. “It’s something we need to manage in 2023 as well, and it’s going to be a difficult year again.”

He says the he does not know exactly when the supply-chain situation will normalise. While some estimates have indicated mid-2023, others are more conservative and suggest the whole year will be affected.

Faury says the airframer is still procuring titanium from Russian supplier VSMPO, which is trading without sanctions, but he says that preparations are being laid to tap alternative sources.

“We’re moving forward to be able to be immune from anything that would happen,” he says.

But he adds: “A world without Russian titanium is not a world as good as it is today in aerospace.”

Faury says an inability to use this source would be a “pure lose-lose situation”, but that Airbus is “preparing for that scenario”.