Ex-Flybe Q400 arrives at Conair base for firefighting modification

Canada’s Conair Group has received the first in a batch of former Flybe Bombardier Q400s due for conversion into aerial firefighters.

The turboprop – registered G-KKEV, and originally delivered to the UK operator in 2008 – is one of 11 acquired by Conair for the modification, following the collapse of Flybe a year ago.

Conair will convert the aircraft, flown to Canada via Reykjavik, into Q400AT air tankers at its Abbotsford facility in British Columbia.

The modification will take around 75 days, the company states, and will begin this quarter with the intention of completing the work ahead of the North American wildfire season. 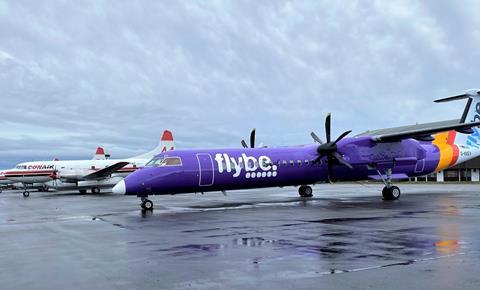 Conair aircraft conversion manager Dustin Littler says the Q400’s interior will be stripped to the “bare frame” to minimise weight. The cabin will remain pressurised, with the retardant tank – capable of discharging 10,000 litres of fire suppressant – fitted externally.

The cockpit will be fitted with a flight-envelope awareness system, avionics which provide angle-of-attack, g-loading and slow-speed information to the crew – enhanced safety data to assist the pilots given the extreme nature of firefighting operations.

“Conair’s priority is the safety of their crews, proactively adopting innovative technologies that go beyond minimum standards,” says the company.

Director of business development Jeff Berry describes the Q400AT as the “most versatile air tanker of its size” for the firefighting role, adding that it is capable of operating from 5,000ft runways.

“This means [it] can respond to a multitude of fires, including those in more remote settings not located near large airports or tanker bases,” he says.