Over the course of next year the 150-seat jet duopoly is set to evolve into a triopoly as the Irkut MC-21 enters service with Rossiya, the most significant Russian commercial aircraft development in decades.

The programme has taken another significant step with the roll-out of the first aircraft whose composite wing structure has been produced by Russian manufacturers. This twinjet is a -300 variant, with Pratt & Whitney PW1400G engines.

Aerostructures firm AeroKompozit was established in 2008 to produce composite sections for the aircraft, including wing panels, using a vacuum-infusion technique.

But the programme had to find alternative sources for the materials after the US government imposed sanctions on some Russian aerospace firms in 2018. 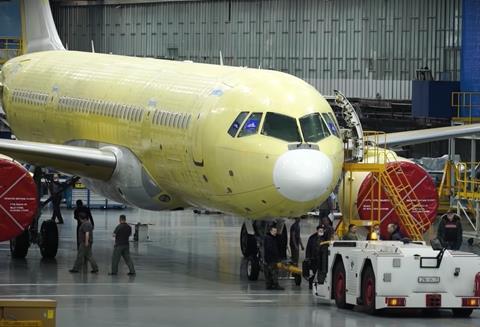 Assembly of the first MC-21 with the domestic wing is a “victory over the sanctions”, he says, and demonstrates the “maturity” of the country’s aviation technology.

The initial aircraft was transferred from the Irkutsk assembly line to the flight-test division on 29 November.

“It’s positive that [the sanctions] forced us to develop our own knowledge in composites,” said Irkut sales and marketing director Kirill Budaev, speaking as the MC-21-310 – the variant with Russian-built Aviadvigatel PD-14 engines – made its first overseas appearance at the Dubai air show earlier in the same month. But he adds that other key foreign suppliers are “fulfilling their obligations”.

Budaev says the airframer is confident of having sufficient composite capacity to produce the number of wings required for its ramp-up programme.

Irkut has orders for 175 aircraft and memoranda covering “several hundred” others, he adds, and the assembly line is being upgraded to enable output of 72 aircraft annually.

The airframer counts Aeroflot Group, Red Wings, Utair, IrAero and a number of lessors among MC-21 customers. Both Aeroflot Group and Red Wings have signed for the -310 as part of their agreement. 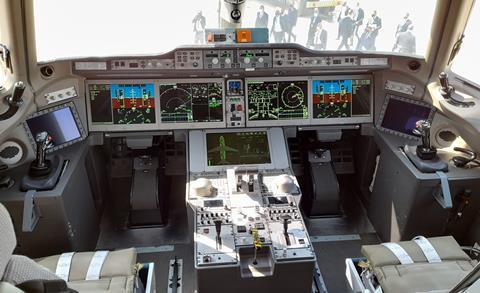 Cockpit of the MC-21-310, showing the active side-sticks, at the Dubai air show

The PD-14-powered MC-21-310’s fuel-burn during the flight between Moscow and Dubai was “similar” to that of the PW1400G-powered aircraft, says Budaev.

Irkut highlights the wide fuselage of the MC-21 – enabling passengers to pass a catering trolley mid-aisle – and its cabin altitude of 1,830m (6,000ft), large windows and overhead luggage bins as appealing features.

Its technological advancements notably include the active side-sticks in the cockpit, which enables each pilot to feel the inputs of the other pilot on the control.

Budaev says Irkut has a strategy to increase the number of Russian-produced components on the MC-21 in the future, and offer a choice to customers.

Federal air transport regulator Rosaviatsia held its latest meeting on Russian certification of the MC-21 on 18 November, and Budaev says he expects approval in the “coming months”. Simulators for the -300 variant, as well as cabin training devices, have already been developed for the training centres of Aeroflot Group.

But to compete with Airbus and Boeing outside of Russia the MC-21 will need to secure external certification. Irkut is working with the European Union Aviation Safety Agency and Budaev says it has a target to obtain EASA approval about a year after that from Russia – but admits that the company “can’t predict” whether this target will be met. “We’ll see,” he says.