US avionics specialist Honeywell has used an Embraer 170 to demonstrate the accuracy of alternative navigation techniques – including one based on magnetic anomalies – aimed at mitigating unavailability of GPS.

The techniques use different sensors, including radar and radio, cameras, and star-trackers to support inertial navigation systems, correcting them in areas where GPS access might be denied, and providing crews with accurate position, speed and heading information.

Honeywell is aiming to make prototype alternative navigation systems available from this year, with initial deliveries expected in 2023.

“Our customers are seeing an increase in both intentional and unintentional navigational disruptions, including jamming for [satellite-based] navigation,” says Honeywell Aerosapce viceo-president for navigation and sensors Matt Picchetti.

It has used the Embraer to conduct airborne magnetic-anomaly aided navigation in real time, measuring the Earth’s magnetic field strength and comparing it with magnetic maps to identify position. 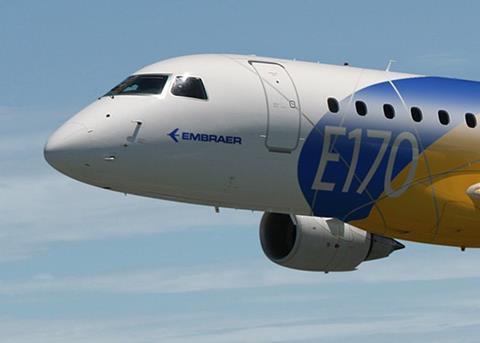 “This is a historic milestone,” claims the company. “Almost all previous magnetic tests were done in special environments to mitigate electromagnetic noise.”

The aircraft was also recruited to demonstrate celestial-aided navigation using not only stars but detection of resident space objects – such as natural and artificial satellites – to provide a non-jammable navigation option.

The regional jet as well as a Leonardo Helicopters AW139 have been employed as platforms for vision-aided navigation which uses live cameras for map comparison, which the company says also improved substantially during denied-GPS performance trials.

“There hasn’t been a single set of solutions that meet all our customers’ operational needs, so we decided to create one,” says Picchetti.