Russian airframer Irkut has received the first MC-21 wing panels for a serial production aircraft, delivered to the Irkutsk-based facility by road.

The 17.5m panel was manufactured at the AeroKompozit plant in Ulyanovsk – a distance of some 3,600km from the MC-21 final assembly line.

Irkut will used the panels for the initial customer aircraft. This will be a -300 variant, powered by Pratt & Whitney PW1400G engines.

“Earlier, this aircraft was equipped with a centre section, also made of domestic composites,” says United Aircraft.

It says the use of strong, lightweight composite materials for the wing will improve aerodynamic performance and support a large fuselage diameter. 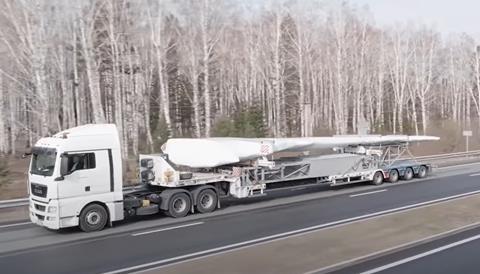 Russian prime minister Mikhail Mishustin, in the government’s annual report on 12 May to the Duma – the lower house of the national assembly – said the aviation industry was preparing for serial production of the MC-21, the Ilyushin Il-114-300 and the Baikal Engineering light aircraft to replace the Antonov An-2.

Mishustin also highlighted the recent maiden flight of the MC-21-310, the version powered by Russian-built Aviadvigatel PD-14 engines, set to be shown at the upcoming MAKS Moscow air show.