Russia’s United Engine is to develop a new turboprop engine for a 40- to 50-seat regional aircraft programme, the TVRS-44, being created by Ural aviation plant UZGA.

The engine will be based on the Klimov TV7-117ST-01 which is undergoing certification for the Ilyushin Il-114-300.

Klimov says serial production of the new powerplant, designated the TV7-117ST-02, will begin in 2025.

The TVRS-44, which takes its name from the Russian for ‘regional turboprop aircraft’ and a baseline configuration of 44 seats, is a design founded on the Czech Aircraft Industries Let L-610.

Klimov says the powerplant will be capable of generating 2,400hp at take-off but have reduced fuel consumption, with design changes including a new lighter-weight high-speed generator and electrical starting system. 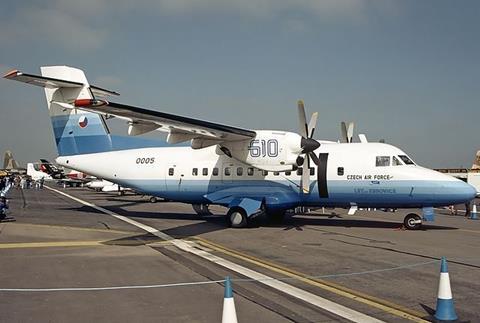 He says initial prototypes will be produced for tests by the middle of 2023, and flight-test engines will be supplied at the end of the same year.

UZGA’s TVRS-44 is intended to replace Soviet-era Antonov An-24s and An-26s, as well as Yakovlev Yak-40 jets and the smaller variants of the Canadian-built Bombardier de Havilland Dash 8.