Rolls-Royce is still awaiting certification for its redesigned Trent 1000 TEN high-pressure turbine blade for the Boeing 787 engine, a delay it attributes to the US FAA’s having higher priorities.

The engine manufacturer insists, however, that it is confident in the modification, introduced after earlier versions of the blade showed durability issues.

Chief executive Warren East, speaking during the company’s half-year results on 5 August, said the certification had been “pushed out”.

“We don’t have that certification yet,” he says “We are expecting [it] before the end of this year.”

East says the blade approval is “in the queue” and the hold-up is linked to intensified workload involving the FAA and Boeing.

“They’ve had a lot of other things to do, and certifying our Trent 1000 blade is a bit lower down on their priorities than it was when we made our original estimates,” he adds.

“We are confident in the parts and we’re already making the new parts to fit when we do the overhauls, just as soon as that certification happens.” 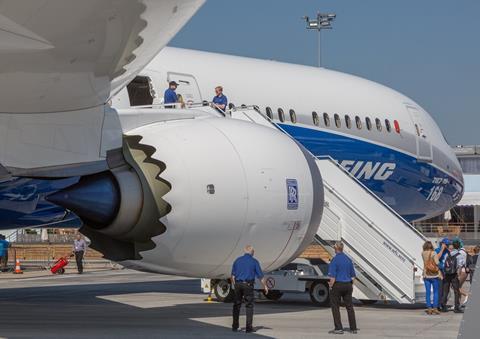 Rolls-Royce’s exceptional provisions for addressing the Trent 1000 problems stood at more than £1.38 billion at the beginning of 2020.

It used £541 million of this provision last year but the combination of pandemic effects, work to reduce aircraft-on-ground numbers, and improved availability of spare engine enabled the company to slash the provision by £560 million, to £321 million.

Over the first half of 2021 the company used a further £148 million but added £24 million to the overall provision, taking the figure to £197 million at the mid-year point.