Russian fleets to comprise over 80% domestically-built aircraft by 2030: government

Russia’s government has outlined a plan to re-invigorate its commercial aviation industry, aiming for domestically-built aircraft to represent more than 80% of the Russian fleet by the end of the decade.

Deputy prime minister Yuri Borisov, speaking during a high-level meeting of government figures, said around 800 helicopters would also be delivered to carriers over the period.

He says deliveries of the initial six production Irkut MC-21 twinjets will begin in 2024, but the development programme provides for delivery of 72 of the type annually from 2029.

To help fill the capacity gap in the interval to 2030, adds Borisov, the plan includes manufacturing another 70 Tupolev Tu-214s.

“These are completely Russian,” he says. “They have been produced in small [numbers] in recent years.”

He also points out that the Irkut Superjet 100, of which about 150 are in operation, is being updated through the SSJ-New programme. Serial production of the SSJ-New, powered by Aviadvigatel PD-8 engines and featuring domestic avionics and other systems, will commence in 2023. 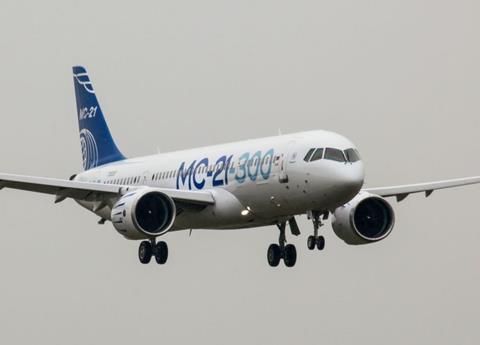 Passengers are carried primarily by Boeing and Airbus types on medium- and long-haul routes. “Our task is gradually to replace the fleet with domestic equivalents,” says Borisov.

He says the regional aircraft fleet will have to be created “virtually anew”, with plans for 70 Ilyushin Il-114-300s, up to 140 of the new UZGA TVRS-44 Ladoga twin-turboprop, and more than 150 of UZGA’s single-engined LMS-901 by the end of the decade.

At this point, says Borisov, the share of domestically-produced aircraft in the Russian airline fleet should rise to 81%.

Andrei Belousov will oversee implementation of the aviation programme, for which the government plans to allocate over Rb770 billion ($14.5 billion), says Borisov, including over Rb150 billion this year.

He insists that the technical characteristics of the MC-21 and SSJ-New, following substitution of imported equipment, will “not be inferior” to Western-built aircraft.

Borisov adds that the price of aircraft over 2026-30 will fall by 2% per year as serial production increases, and the cost level for maintaining airworthiness will reach that of foreign competitors during 2030-35.

Government incentives to increase the appeal of domestically-built models include reducing interest on loans for Russian leasing companies to acquire aircraft and helicopters, reducing airlines’ lease and servicing payments, and creating an aftersales maintenance network.