Russia’s United Aircraft is progressing with the consolidation of management across the country’s main aviation enterprises, with several entities to be merged within the transport division.

Ilyushin is the parent company of the transport aviation operation.

Under the centralisation plan it will oversee the Aviastar plant at Ulyanovsk, the VASO production facility at Voronezh, and the Myasishchev design bureau.

Aviastar is primarily associated with production of the Ilyushin Il-76-MD-90A and potentially the twin-turboprop Il-112V, but has links with the Antonov An-124 programme and is a supplier to the Irkut MC-21. 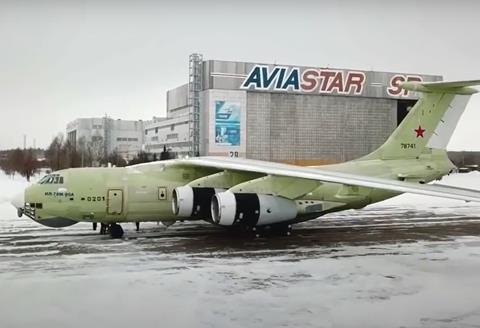 Aviastar is associated with programmes including the modernised Il-76

The VASO plant has been a production facility for Il-96 long-haul airliners and An-148 regional jets, and has been co-operating on programmes including the Il-114-300, Il-112V and Il-76MD-90A.

Myasishchev has long been linked to experimental aircraft design, with its VM-T Atlant heavy payload carrier among its more extraordinary creations, but it also has a history of developing strategic bombers.

United Aircraft says the centralisation is being conducted to eliminate duplicate administrative functions, reduce costs, and increase the efficiency of its aircraft production programmes.

“At the same time, the main design and production activities of the merged enterprises – their traditional competencies – as well as social guarantees for employees will be preserved.”