United Aircraft chief Yuri Slyusar has highlighted the potential difficulty of sourcing enough personnel to ensure stability in the Russian aerospace industry, as it ramps up production in various areas including civil aviation.

“The situation is not easy and requires our response,” he said, adding that the personnel issue could become an obstacle to stable development of the sector.

Slyusar says the industry has had to deal with several pressures – the need for orders, the burden of sanctions, and the onset of the pandemic – and states that “significant changes in the labour market” present “one more serious challenge”.

He points out that the issue is not only quantitative but qualitative, because simply replacing personnel to maintain a workforce does not necessarily mean the level of ability remains constant. 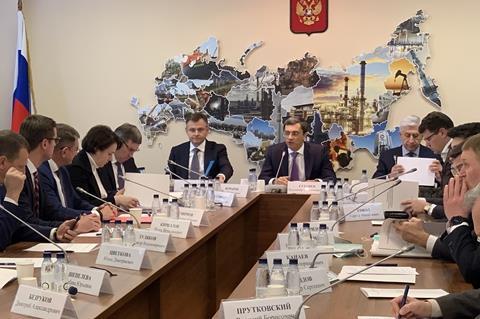 United Aircraft is developing various new aircraft types including the Irkut MC-21 and the Ilyushin Il-114-300, the Il-112V, as well as engines such as the Aviadvigatel PD-35.

It says the industry needs to attract sufficient numbers of qualified workers and increase the “level of motivation” of engineers.

United Aircraft states that attendees raised the issue of salaries being limited by pricing systems used in government defence contracts.

Human resources director Lyubava Shepeleva refers to the continuing effect – especially in certain areas – of a “demographic hole” in the country, which emerged after the collapse of the Soviet Union, as well as the migration of people between regions.

“Competition for personnel with other sectors of the economy is increasing, including those with which the defence industry has not previously had to compete to such an extent,” the company adds, identifying the energy, construction, logistics and service sectors as examples. Recruiting IT specialists, for which there is an “avalanche” of demand, is a notable issue, it says.

“We are constantly working to improve our personnel strategy, focusing our main efforts on such priorities as increasing wages, expanding the social package, comfortable working spaces, training and development of personnel,” says Shepeleva.

She adds that United Aircraft will continue to pursue initiatives which have proven successful, including vocational guidance for young people.