United Aircraft’s board has approved the merger of the company with Sukhoi and RSK MiG as part of the continuing restructuring of the Russian aerospace industry.

Shareholders of United Aircraft will vote on the merger proposal in January next year.

The restructuring follows the centralisation of management of Sukhoi and MiG, with MiG’s executive functions transferred to Sukhoi, and those of Sukhoi moved to United Aircraft.

United Aircraft, whose board met on 30 November to approve the merger, says it will transform from a three-tier to a two-tier structure, describes the combination as an “important event” for the Russian aviation sector.

But it stresses that the Sukhoi and MiG brands will be retained. 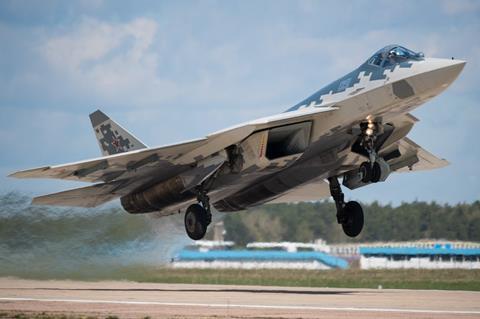 Sukhoi and MiG, long associated with defence aviation, will retain their brands

“Preparations have been made and details have been worked out in order to start forming a unified entity, a structure capable of giving a powerful impetus to the development of the Rostec aviation complex and the entire industry,” says United Aircraft general director Yuri Slyusar.

“Best corporate governance practices, advanced engineering competencies, and a developed and efficient production base should be gathered in a single structure. We are laying the foundation for the future of Russian aircraft manufacture.”

Sukhoi and MiG respectively generated revenues of Rb140 billion and Rb70 billion over the course of 2020.

“Reduction of management levels and simplification of United Aircraft’s corporate structure will eliminate duplicate administrative functions and reduce [costs],” says the company, adding that the process will improve the effectiveness of aircraft manufacturing and increase its financial stability.

United Aircraft’s consolidation and centralisation efforts have also recently resulted in the integration of the Voronezh-based aircraft plant VASO, the Ulyanovsk-based airframer Aviastar, and the Myasishchev plant in Moscow with the Ilyushin division.