Russian researchers are testing a wing surface modification with vortex generators aimed at reducing the risk of airflow separation and stall at high angles of attack.

The work is being conducted at Moscow’s Central Aerohydrodynamic Institute and centres on surface microrelief featuring a zig-zag of vortex generators manufactured from polymer film.

Subsonic windtunnel tests have been carried out to explore the optimal location for this microrelief surface, says the institute, with wings tested at angles of attack up to 35° and flow rates of 15-20m/s.

Aerothermodynamics research department deputy head Maxim Ustinov says the tests showed the most effective location to be in the leading-edge zone of the wing.

“This not only increases the maximum lift coefficient, but also significantly slows down its decline at supercritical angles of attack,” he adds. The test programme also included examining the effects on a wing with flaps and slats. 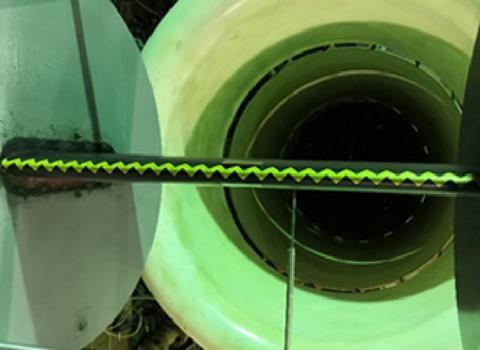 Zig-zag vortex generators have the potential to improve lift coefficient

Research will be expanded this year to test the mechanism on a model of a helicopter’s main rotor blade.

Specialists will study the way the microrelief influences separation of the flow, and this information will considered for rotor blade profiles.

“It is expected that the use of microrelief will significantly increase the aerodynamic characteristics of a helicopter, in particular its maximum speed,” says the institute.

It presented a paper last October to a scientific conference on aerodynamics outlining the effect of zig-zag microrelief, to generate longitudinal vortices, on a rectangular wing.

The zig-zag modification was some 20mm in width, with heights of 0.1-0.4mm, and different numbers of rows of zig-zags were considered.

This experimentation indicated that the lift coefficient was increased, delaying the stall and eliminating a sharp drop in lift forces, the paper says.