A new competition has emerged to upgrade the radars for potentially hundreds of the original Boeing F/A-18 Hornet fighters operated by US and foreign militaries.

Raytheon recently performed a flight test of the APG-79(V)X radar, a system scaled down from the APG-79 installed on the F/A-18E/F Super Hornet.

“I was sitting in the testbed myself and watching it real time it felt like watching the APG-79 I saw in the fleet,” says Michael “Ponch” Garcia, a Raytheon business development director and former US Navy F/A-18E/F pilot and instructor. 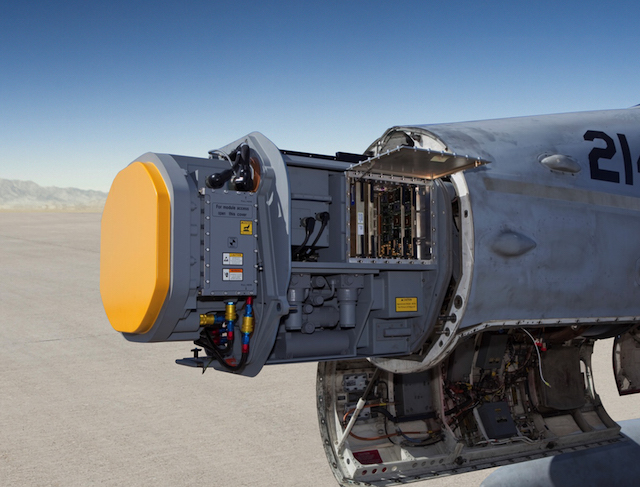 Meanwhile, Northrop offers the scaleable agile beam radar (SABR) as an upgrade for legacy Lockheed Martin F-16s, but it can be adapted for older F/A-18s.

Northrop “believes SABR to be a natural fit for the aircraft. With common modes leveraged from the [Lockheed] F-35, the APG-83 SABR would bring fifth-generation aircraft [radio frequency] performance to the Hornet, and extend its operational relevance for the life of the platform,” says Jeff Leavitt, vice-president for combat avionics systems.

The F/A-18 upgrade market had previously been limited to the Super Hornet variant, but several recent moves have made retrofits for legacy Hornets feasible.

Last October, the US Marine Corps released a long-term aviation plan which deferred the retirement of its last F/A-18C/D units by five years to 2030, matching the service life expected by the Finnish air force. Meanwhile, voters in Switzerland last May rejected a plan to replace F/A-18s with Saab Gripens.

Raytheon’s Garcia says a Hornet radar upgrade is being considered by the USMC and international operators, but declines to identify the potential foreign customers.

Replacing mechanically-scanned APG-65s or APG-73s with an AESA could drive additional upgrades. Some customers are considering replacing the mission computer and other systems, such as radar warning receivers.

“That’s kind of the discussions we’re in right now: what is the optimal upgrade path that supports this to give you the most bang for the buck,” he says.