​Air Force and Lockheed to initiate airworthiness tests for FA-50

Following an airworthiness assessment of Textron AirLand’s dual light attack fighter and trainer, Scorpion, the US Air Force is moving toward a second cooperative research and development agreement (CRADA) with Lockheed Martin.

The USAF is far along in discussions with Lockheed to enter a CRADA for the FA-50, air force spokesman Ed Gulick told FlightGlobal. The FA-50, a joint venture with Lockheed and Korean Aerospace, is the advanced, light combat version of the T-50 Golden Eagle. The fighter is equipped with Link 16 tactical data link and can carry both Boeing’s Joint Direct Attack Munition and Textron’s CBU-97 Sensor Fuzed Weapon.

After a March industry day with ten aerospace companies at Wright-Patterson Air Force Base, Lockheed and Textron emerged with the most mature designs for the first CRADAs, Camron Gorguinpour, the air force’s director of transformational innovation told FlightGlobal. Textron’s CRADA has already been executed and the USAF expects to begin Lockheed’s CRADA within the coming months, he said.

The USAF’s new CRADAs allow the service to assess an aircraft’s airworthiness without a programme of record and could open up sales to customers besides the US military and foreign military sales customers. Industry interest in the CRADAs has often been driven by domestic companies looking to market abroad, though nothing about participating in the agreement precludes a company from trying to sell the aircraft to the USAF, he adds.

“With the information we provide, they can go back and modify the designs to account for certain risks that we might identify,” Gorguinpour says. “But also, these aircraft might be sold directly to foreign allies. So having the air force review the aircraft for air worthiness that lays out the risk is something that potential foreign customers might value because they like to see that the air force has actually looked at these things.” 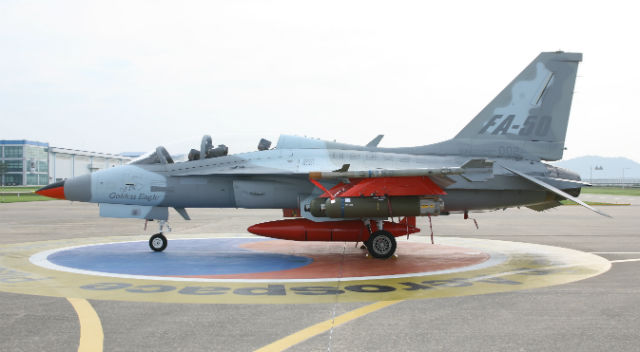 But while Textron’s CRADA positions the Scorpion for foreign markets, the FA-50 has already scored numerous foreign buyers. The Republic of South Korea has at least one operational squadron of FA-50s and the Philippines has ordered a total of 12 aircraft, the first of which were delivered last fall. In 2013, Iraq also ordered 24 T-50IQs, a variant of the FA-50. Meanwhile, Lockheed still has potential South American customers in their sights for an FA-50 buy.

Instead, Lockheed’s CRADA could mean an inexpensive advertisement for its USAF T-X trainer bid, according to Richard Aboulafia, vice-president of analysis for the Teal Group.

“With the Scorpion, it’s more complicated because there’s no civil approval,” he says. “But with the FA-50, there are several operators in various incarnations. It might be good publicity at a low price, if nothing else, for T-X.”

Lockheed’s bid for the T-X trainer, the T-50A, shares the same airframe and single General Electric F404 engine as the FA-50. The fighter variant is distinguished by its Elta Systems EL/M-2032 pulse doppler radar, which helps enable the aircraft’s air-to-air and air-to-ground missions.

“I think an assessment of its combat effectiveness probably hinges on more than the US assessment,” Aboulafia says. “But on the other hand, I guess this couldn’t hurt.”