A350 launch-aid tweaks fail to persuade US to ease tariffs

US authorities are unconvinced by recent Airbus claims that amended A350 launch-aid agreements equate to implementation of a World Trade Organization ruling to remove subsidies.

But the US Trade Representative insists that the European side has “not taken any action” on six launch-aid measures determined not to be compliant with WTO requirements.

It adds that, despite the Airbus steps to adjust the A350 contracts, the actions “do not implement” the WTO dispute-settlement recommendations by withdrawing the subsidies received by the airframer. 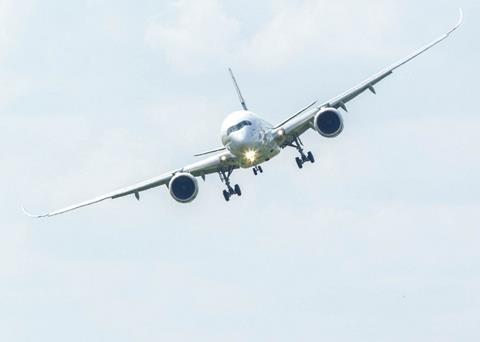 The US Trade Representative had reviewed its tariffs in June and sought views as to whether the list of European target products should be adjusted. It says it received 24,000 public comments.

Airbus says it “profoundly regrets” the decision by the US side to maintain tariffs – including a 15% duty on aircraft – at a time when aviation, and other industries, are trying to cope with the economic downturn.

An appeal, as well as a counter-case against alleged US subsidies to Boeing, are still progressing slowly through the WTO dispute process, but have been delayed by several months.

Following the US side’s refusal to de-escalate the situation, Airbus states that it trusts the European authorities to “respond appropriately” to defend its commercial interests and those of other industries affected by US tariffs.

The US Trade Representative has reiterated its position – outlined in February – that its action might immediately be “revised as appropriate” upon any imposition of additional duties on US products in connection with the European side’s own WTO challenge to alleged US subsidies.

Airbus had wanted to offer a resolution to the dispute, pointing out that its US customers are among those affected by the tariffs.

It has not indicated how many US deliveries are involved, the overall scale of the tariffs, or the extent to which it is working to mitigate the impact.

But Airbus says it is “demonstrating support” to those suffering from the “severe” effects of the tariff regime, particularly given the additional pressure from the coronavirus crisis.