Airbus is offering carriers a modification and regulatory support scheme to convert passenger A350s, A330s and A340s temporarily into main-deck freighters by swapping out seats and fitting pallets onto their floor tracks.

Modification is provided to operators under an Airbus service bulletin which sets out not just the engineering work but also manages securing of European Union Aviation Safety Agency approval.

EASA has issued guidelines to operators seeking to use passenger aircraft as freighters, setting out a limited exemption period of eight months in order to allow carriers to capitalise on dormant fleet capacity while the coronavirus crisis persists.

Airbus test pilot and vice-president of flight operations support Yann Lardet says there has been an “evaporation” of capacity just as demand for medical supplies has increased. He says some 45-50% of cargo had been carried in passenger aircraft holds.

While airlines can apply to EASA for main-deck modification, Lardet says this case-by-case procedure is “quite a painful process”. Airbus is offering to handle this regulatory side, free of charge, by providing all the necessary documentation, with operators only contributing the cost of labour for the modification.

“Customers can generate revenues with aircraft that would otherwise be grounded,” says Lardet.

The modification involves removing seats then bringing in empty standard PKC pallets through passenger doors and attaching them to seat tracks.

Conversion is typically limited to economy-class seats because premium seats are “more effort” to remove, says project leader and A330/350 programme specialist Matthias Ierovante, adding that galleys and monuments also remain in the aircraft.

Airbus’s conversion, carried out at the customer’s base, does not require bespoke kit. “We’ve tried to find a quick solution,” Ierovante says. “It uses standard cargo equipment that can be procured easily.” 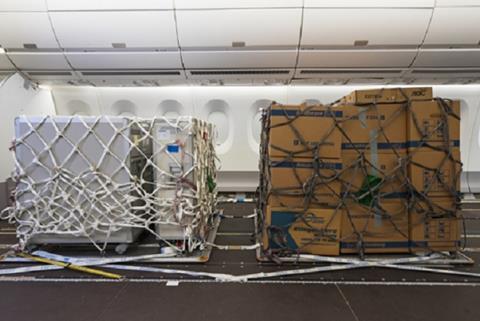 Fitting pallets protects the cabin floor and avoids the problem of wear on the cabin seats. Each pallet is capable of holding 260kg of cargo, with a volume of about 2.7m³.

About 30 pallets can be installed on an A350, 28 on an A330, and there is a small demand for equipping A340s. Lardet says Airbus would be prepared to look at A380 modification if customers requested it.

Safety remains a priority, says Ierovante. Cargo stowage checks have to be carried out before take-off and landing, and whenever requested by the captain. Centre-of-gravity, weight and evacuation criteria must be respected, and fire protection is critical.

Under the EASA guidelines heat-generating systems such as in-flight entertainment, in-seat power, and galley equipment must be de-activated, along with supplemental oxygen systems in the cabin areas. Portable devices powered by lithium batteries, including unnecessary emergency locator transmitters, need to be removed.

Along with the pilots the aircraft must carry trained fire monitors – typically three cabin crew – who must be seated away from the cargo and perform regular safety walks, carrying portable oxygen, to check for any sign of smoke or fire – including in the overhead bins. These monitors must also be able to tackle an outbreak with regular cabin equipment.

Lardet stresses that the EASA regulations forbid any cargo classified as dangerous goods to be transported in the modified passenger cabin.

EASA does not require installation of a 9g barrier and smoke barrier to protect the cockpit, although each pallet and its load must be protected from shifting during flight. Airbus’s modification restrains the cargo using 9g netting.

Lardet says the temporary conversion enables a passenger aircraft to be ready for cargo transport in “a couple of days”, depending on its configuration, and Airbus’s scheme also covers re-installation of the original cabin components to restore the aircraft for passenger operations.

Around 20 operators – none of which the airframer is identifying – have requested the regulatory assistance.