Airbus chief executive Guillaume Faury remains confident about the A320neo-family ramp-up, having shifted the trajectory for achieving a monthly production rate of 65 aircraft.

Speaking during an Aviation Club event in London on 12 October, Faury insisted the ramp-up was a “credible plan” despite continuing supply-chain issues.

In July the airframer pushed back by six months, to early 2024, the schedule for reaching the 65-per-month rate.

“Early 2024 is the best assessment we have,” says Faury, adding that he was “relaxed” about the ramp-up even though returning to pre-crisis levels of production “takes a lot of energy”. 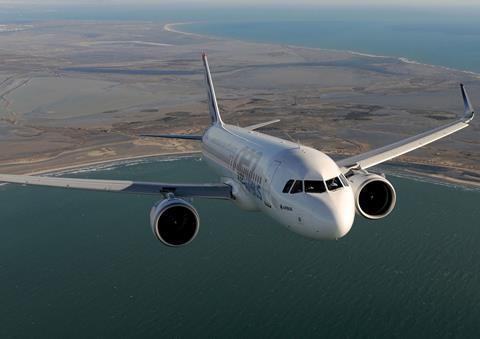 Faury acknowledges the company has “a lot on [its] plate this year”, particularly for the final quarter.

But he states that the situation is “not a lot different” from that which Airbus has faced in each of the years from 2017-19.

Airbus is aiming to reach 700 aircraft deliveries this year, and had achieved 437 at the nine-month point of 30 September – equating to 62% of the total.

The airframer had previously reached similar levels of 63% in 2017 and 2018, years when it delivered a total of 718 and 800 aircraft respectively.

This back-loading weight eased slightly in 2019 when, at the nine-month mark, the airframer had delivered 66% of its full-year total of 863 jets.

While returning workforce levels in the industry to pre-crisis levels has “proven to be difficult”, Faury also believes the further ramp-up plan, to a monthly output of 75 A320neo-family aircraft in 2025, is a “good target” and “likely to happen” despite continuing concerns from suppliers, notably engine manufacturers.