Airbus is preparing a patent application for a distributed pod-based configuration for a hydrogen fuel-cell powerplants, which it is exploring as a possibility to overcome the problems of scaling up the technology to large transport aircraft.

While smaller propeller-driven aircraft, up to around 20 seats, can take advantage of standard twin-engined arrangements when testing hydrogen-based power, larger designs with longer range “require another solution”, says the airframer.

It is looking into – among other options – a pod-based powerplant design which effectively uses self-contained propulsion systems which would be individually mounted on the wing.

Each pod acts as a standalone engine, featuring a liquid-hydrogen tank, fuel cells, electric motors and a propeller, plus other electronic and cooling systems. 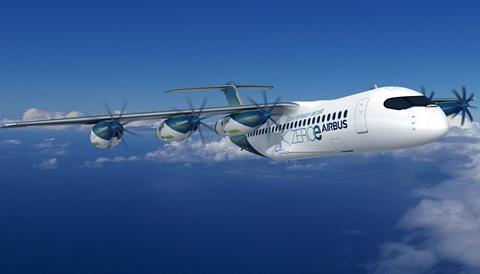 Airbus has unveiled a potential configuration using six of these pods, each with an eight-bladed composite propeller, one of several designs being examined under its ZEROe advanced zero-emissions aircraft programme.

“These pods are not designed to be driven by any ordinary propulsion system,” it says. “Hydrogen fuel cells are among the key components.”

Airbus says it is publishing a patent application in December for the configuration. “The pod configuration is essentially a distributed fuel cell propulsion system that delivers thrust to the aircraft via six propulsors arranged along the wing,” says Thomas.

Hydrogen atoms comprise a single proton and electron. Fuel-cell technology separates these particles, channelling the electrons through a circuit as an electric current – driving an electric propeller – while the protons are pushed through a membrane into a flow of oxygen, creating water as a by-product.

The distributed architecture of the pod configuration, Airbus argues, potentially simplifies such issues as fuelling and maintenance.

But vice-president of zero-emission aircraft Glenn Llewellyn points out that the design, while a “great starting point to nurture further inquiry”, is not a final selection. Airbus is looking to narrow its options over the next five years and reach a decision around 2025.

“This is one option, but many more will be conceptualised,” says Llewellyn.

Airbus says it expects to submit “several” more patents as part of its ZEROe research. “Although advanced in its design, the pod configuration still requires a lot of work to determine whether it could be a suitable solution,” it adds.