Airbus has conducted a satellite ferry to Cape Canaveral using its A300-600ST Beluga transport, as the company seeks to expand use of the type for third-party outsize services.

Two of the Beluga twinjets are in operation with the Airbus Beluga Transport division, set up to capitalise on remaining life in the fleet following the aircraft’s withdrawal from their aerostructure logistics role with the airframer.

The logistics arm, Airbus Transport International, will continue operating the Belugas until the new carrier receives its air operator’s certificate next year.

Airbus transferred the Hotbird 13G satellite – build by its own space arm – from Toulouse to the Space Shuttle landing facility at Cape Canaveral with aircraft F-GSTC, powered by a 30% blend of sustainable aviation fuel. 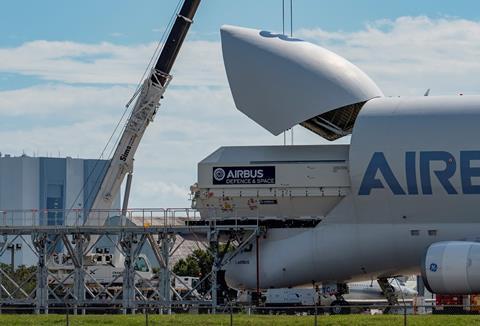 It arrived in Toulouse from Bordeaux on 13 October, departing the same day with the satellite on board, on a multi-sector voyage via Lajes in the Azores, Gander, Portsmouth, and Orlando, arriving at the Kennedy Space Center on 15 October.

The Eutelsat telecommunications satellite is set to be launched in November on board a SpaceX Falcon 9 vehicle.

Airbus Transport International head of external flights Carole Martin says the payload was “very sensitive to humidity and temperature” and this demanded a rapid delivery.

“The worst enemy is humidity,” she says. “You need to make sure the satellite is perfectly dry before launching it to space.”

Airbus had previously used one of its Belugas nearly two decades ago to ferry a satellite to the Baikonur cosmodrome. But the Hotbird 13G operation was carried out through the new dedicated Airbus arm aiming to offer high-capacity transport to third parties – particularly given the reduced access to Russian-operated Antonov An-124s.

“The ability of Airbus to field an autonomous European solution is underscored by the transportation of our satellites in the unique Beluga aircraft,” says Airbus head of space systems Jean-Marc Nasr. 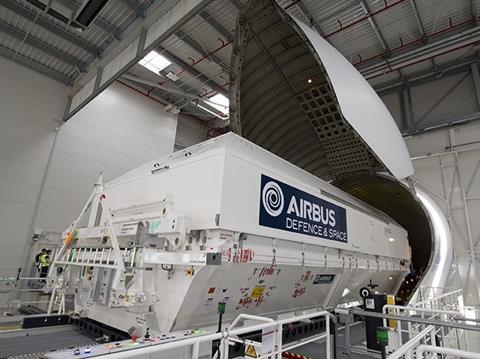 He says eight similar spacecraft are in production. While Airbus is offering a “sovereign” service, says Nasr, it still has to compete commercially for the business and the space division will negotiate prices for the shipments.

Airbus Beluga Transport’s fleet will expand as the remaining A300-600STs are phased out of the logistics fleet – replaced by the larger A330-700L BelugaXL – and transferred to their new role. All five of the original Belugas will be integrated with the new carrier from 2024.

The aircraft is already proving itself with flights shipping Airbus Helicopters H225 and H160 models to Singapore and Sao Paulo, says Airbus Beluga Transport managing director Benoit Lemonnier. He says the Beluga brings a “unique capability” to the market.

Lemmonier adds that the Hotbird 13G flight brings to five the number of missions completed with the new service, and at least one for an external customer will take place by the end of this year.

The ability to carry helicopters appeals to the military in particular, and Airbus is forecasting a “significant share” of business from the armed forces.

Airbus has been investing in loading systems for the Beluga, and already has six outboard 35t lifting platforms available which are being despatched to customer stations. The airframer is also developing a 20t on-board cargo loader for the aircraft. Both are fully-autonomous with no crane required.