Airbus has parked a second A300-600ST Beluga transport following the introduction of the higher-capacity BelugaXL.

The airframer withdrew one of its five -600STs – the Beluga 2 aircraft, F-GSTB – last October, placing it into temporary storage.

Airbus tells FlightGlobal that it has similarly stored another aircraft, Beluga 1 (F-GSTA), this week.

“The [A300-600ST] fleet will be retired progressively from Airbus’s commercial operations as more BelugaXL aircraft enter into service,” it says.

Manufactured in 1994, Beluga 1 is the oldest of the -600STs operated by the company’s logistics division, Airbus Transport International.

All five aircraft are fitted with General Electric CF6 engines. 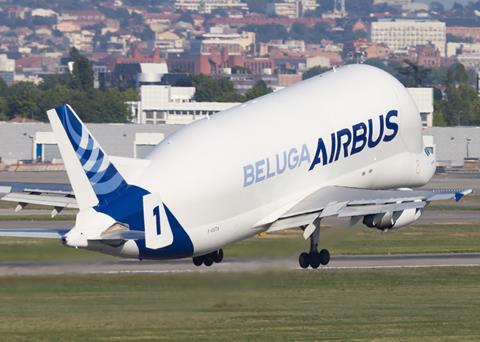 Although the -600ST airframes are being replaced by the BelugaXL – a derivative of the A330, designated the -700L – the older aircraft still have considerable service life, and Airbus is looking at options for their continued use with a view to clarifying to situation in mid-2021.

“The [-600STs] will be able to fly for many years,” it says. “So we are looking into possible scenarios for future operations.”

Three BelugaXLs have been constructed and Airbus is planning to have six in the fleet. The aircraft’s larger main deck enables it to transport a pair of Airbus A350 wings.