Oman’s government has welcomed the decision by Bahrain’s leadership to establish full normalisation of diplomatic relations with the state of Israel – potentially allowing a further expansion of Israeli-Arab air services.

Bahrain is the second Arab nation within a month to reach such a decision, and the support of Oman signals a further formal shifting of the Gulf states’ attitude towards Israel.

The latest agreement was reached during a call between the king of Bahrain, Hamad bin Isa bin Salman al-Khalifa, and Israeli prime minister Benjamin Netanyahu.

Bahrain’s government says the measure is a “historic step” towards achieving Middle East peace, following the similar agreement between Israel and the United Arab Emirates in mid-August, and will support “stability, security and prosperity” in the region.

It adds that it has accepted an invitation to attend the signing ceremony of the Israeli-UAE pact on 16 September.

The Omani government had already shown willingness to forge a closer relationship with Israel.

Netanyahu had visited Oman in October 2018 and subsequently stated that Omani authorities were prepared to allow El Al overflights.

This was reflected in the El Al flightplan for its landmark Tel Aviv-Abu Dhabi ceremonial flight on 31 August, which indicated plans to transit Omani airspace if the aircraft was barred from Saudi Arabian passage. Saudi authorities, however, permitted the El Al flight to cross. 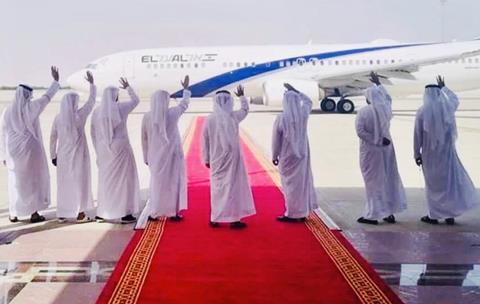 Oman’s government says it has “welcomed the initiative” taken by Bahrain, its “sisterly kingdom”.

“[The sultanate] hopes that this new strategic direction chosen by some Arab countries will be a practical tributary towards achieving peace based on ending the Israeli occupation of [Palestine],” it says, underlining its support for Palestinian statehood.

If the Bahraini-Israeli normalisation follows a similar path to that of the UAE, it opens the prospect of future non-stop flights by the kingdom’s Gulf Air to Israel as well as services by El Al, and other carriers, to the Bahraini capital Manama.

Neither Gulf Air nor El Al has yet publicly commented on the situation.

Bahrain’s transport ministry had previously signalled a warming of relations with Israel with indications that, in line with Saudi Arabia, it would open its airspace to aircraft operating UAE-Israeli routes.

Carriers operating to Israel from Bahrain – and potentially Oman – would, like airlines from the UAE, realistically require the authorisation to cross Saudi airspace to make air routes viable.