One of the ironies of Berlin Brandenburg airport’s much-delayed opening is that the onset of the air transport crisis has brought an excess of capacity to a hub which, at one point, was thought to have a shortage.

Combined passenger numbers for Tegel and Schoenefeld airport for the first eight months of 2020 reached just 7.3 million, a figure more than 40% below the level in 2007 – the original projected opening date for a new Berlin hub.

Brandenburg finally opened on 31 October, 13 years behind schedule and eight years after the extraordinary decision to abandon a firm June 2012 opening just a couple of weeks beforehand.

The airport was originally intended to be a landmark privatisation initiative but the competing consortia became mired in a legal dispute after the selection process, eventually opting to team up and propose a jointly-managed project.

This was rejected by the German government, which believed the price was too high and proposal too risky, and it chose to scrap the privatisation in 2003 in favour of funding the project from public and commercial sources.

Brandenburg then faced delays arising from detailed legal consideration over such issues as noise, the insolvency of a technical planning partner, and the need to take into account new European security requirements.

But as the airport neared a final opening date of 3 June 2012, a bombshell revelation emerged that the terminal building’s complex fire-safety and smoke-extraction system did not meet requirements.

This was a crucial determination, because the German government had been rocked by the fatal Dusseldorf airport terminal fire in 1996 which resulted in 17 fatalities – many of them from smoke inhalation.

The abandonment of Brandenburg’s opening at such a late stage triggered a backlash from airlines – notably local carrier Air Berlin, which had carried out extensive preparations to transfer to the new hub and expand its operations.

Adapting the fire-protection system required extensive redesign and modification to a building which had already effectively been completed, with substantial changes to the basic architecture of the system, along with relocation of dozens of kilometres of cabling, and updating of the IT equipment.

Such was the extent of the work required that there were even calls for the entire terminal to be demolished and rebuilt.

Delays to the opening forced investment to upgrade the old airports, which were supposed to have closed once Brandenburg was operational, and prompted concerns that the new hub’s initial design capacity would ultimately be insufficient.

The main building, Terminal 1, is able to handle around 25 million passengers, says the airport’s operator FBB.

After Air Berlin filed for insolvency in August 2017, total passenger numbers at Tegel and Schoenefeld fell during the following 10 months. By the end of 2018, however, the decline had been reversed, and the airports showed a 4.2% increase in passenger numbers, to 34.7 million, for the full year.

While capacity from Air Berlin’s collapse was quickly snapped up, the air transport crisis has inflicted far greater damage on airline operations at the new capital airport – but also provided a much greater than expected margin in terms of capacity.

Brandenburg features an adjacent building, Terminal 2, which operator FBB says “will not be needed for the commissioning” owing to the crisis. 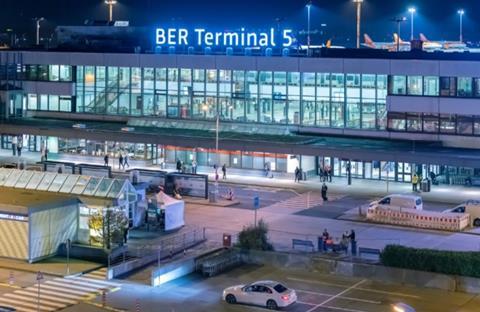 FBB says the former Schonefeld airport – which complements Brandenburg’s infrastructure – has been redesignated as Terminal 5, offering capacity of 8-10 million passengers. The airport’s previous IATA code ‘SXF’ was superseded by ‘BER’ on 25 October.

The operator says that “sufficient capacity” is available at the overall airport system, which will have the ability to handle more than 40 million passengers and becomes the third-largest airport in the country behind Frankfurt and Munich.

Commercial services at the hub began on 1 November, following the arrival of symbolic Lufthansa and EasyJet flights during the opening ceremony the day before. Flights are initially using the northern runway, while the southern runway will be brought into use on 4 November.

“The people here in the German capital region had to wait a long time for this day,” said FBB chief Engelbert Lutke Daldrup during the opening. He says that the hub will “serve as a solid basis for the coming decades”.

“With the opening of the airport, the time has come to regain lost confidence,” says Brandenburg state minister president Dietmar Woidke. “Now it is time to look ahead. [The airport] will be a strong driver for economic growth and employment in the region and for the whole of eastern Germany.

“I am convinced that [the airport] will live up to its role as the largest and most important infrastructure project in Brandenburg and Berlin.”