The US Federal Aviation Administration will not clear the Boeing 737 Max to fly until sometime in 2020, the agency’s chief said on 11 December.

FAA Administrator Steve Dickson confirmed the 2020 timeline on the same day he laid out remaining steps the FAA will take before lifting the Max grounding.

“We are not on any timeline,” Dickson told CNBC’s Squawk Box. “There are about 10 or 11 milestones left to complete.”

“Each one of those processes is going to take some time,” Dickson adds. “If you just do the math, it is going to extend into 2020.” 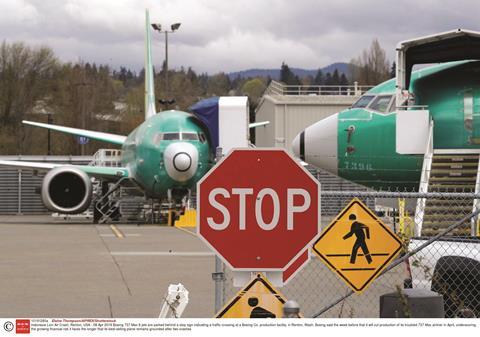 The 737 Max has been grounded since March, shortly after the crash of an Ethiopian Airlines 737 Max 8

Until recently, Boeing has said it expects the FAA will approve the Max to fly before year-end.

Asked on 11 December about its timeline, Boeing says, ”We continue to work closely with the FAA and global regulators towards certification and the safe return to service of the Max”.

US airlines have removed the aircraft from their flight schedules until early March 2020.

Dickson further addressed the Max’s certification during an 11 December hearing of the House Committee on Transportation and Infrastructure.

“We are currently looking at how the software has been developed, along with our international partners,” he told lawmakers. Dickson adds that the FAA is auditing information related to the 737 Max’s flight control software ahead of the certification flight.

He laid out the FAA’s remaining steps in prepared testimony to the committee.

Once satisfied, the FAA will issue a continued airworthiness notification, which will review pending safety actions. It will then issue an airworthiness directive, in which the agency will specify required actions.

Dickson declines to address what specific pilot training the agency may require as part of its Max certification.

Dickson says his agency will address issues beyond those related to the 737 Max.

The agency aims to move “toward a more holistic versus transactional, item-by-item approach to aircraft certification”, according to Dickson’s written testimony. That change is intended to account for the complex interactions between crew and aircraft systems.

The agency will also seek to ensure that “human factors considerations” are integrated more effectively into aircraft design, and to improve the flow of information through the FAA.

Dickson also says the FAA must become more “data driven” and “risk-based”. That means, partly, that the agency will seek to oversee the industry with more consideration for the interaction between all players – aircraft, pilots, flight attendants, engineers, mechanics, dispatchers and air traffic controllers, his testimony says.

“We have to look at the overall aviation system and how all the pieces interact,” Dickson’s testimony says. “Focus on a single factor will lead us to miss opportunities to improve safety.”