Airbus is completing structural assembly of the first A321XLR, as the airframer prepares to commence flight-testing next year and maintain its entry-into-service target of 2023.

Designated with the serial number MSN11000 the long-range twinjet has been assembled at the Hamburg Finkenwerder plant.

Fuselage, empennage and wing mating have all been carried out and the aircraft’s landing-gear has been fitted.

The major sections had been delivered to the final assembly line – known as FAL Line 2, located inside the Hangar 9 building – from various Airbus supplier plants by November.

Two other flight-test aircraft, MSN11958 and MSN11080, are being constructed at Finkenwerder but other Airbus assembly lines will ultimately be used to produce A321XLRs. 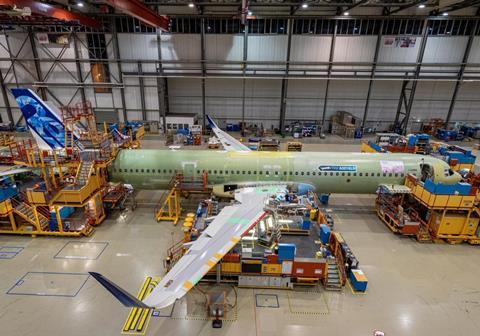 “It is important for sure that all the teams learn from the experience in Hamburg so we can bring this knowledge to the other facilities,” says A320-family programme head Michael Menking.

Mating of the aft and forward fuselage sections, including the structures containing the rear centre tank that gives the XLR its range, took place at Station 41 within the Hamburg plant.

Supplied by Premium Aerotec, the tank has capacity for 12,900 litres of fuel. The XLR, which will have a range of 4,700nm, is also fitted with a larger waste-water tank.

The assembled fuselage was then transferred by crane to Station 40, positioned for wing and landing-gear attachment, before being moved to Station 35 for fitting of the vertical fin and horizontal stabiliser. Various other components were also fitted, including modifications to the fuel system which connects to the rear centre tank.

After undergoing hydraulic power-on, the aircraft was taken to Station 25 for pressurisation checks, interior fitting, avionics and other systems testing. The last stage on the final assembly line will comprise installation of cabin furnishings including seats for the flight-test personnel.

“This test aircraft has a partial cabin installed to leave space for all the required flight-test equipment,” says head of A320-family value-stream management Gerd Weber.

“There is a lot of documentation work to be done, especially for flight-test installation, which is very different from our serial process. So this requires a special focus by all the teams in closing the documentation and dealing with any discrepancies.”

But he says that, in terms of final assembly, there is “not a big variation” compared with the production of other A321 models.

“The major differences in the XLR are seen in the [pre-final assembly stage], at section assembly level, where the rear centre tank is installed, for example.”

MSN11000 is still to have its CFM International Leap-1A engines fitted as well as the full suite of flight-test instrumentation. It will then undergo further checks – including landing-gear retraction – and painting before being transferred to Airbus’s flight-test division.