Operator Fraport states, in its first-half briefing, that almost 21 million passengers passed through the hub over the six months to 30 June – although this was still 38% below pre-pandemic levels.

It expects Frankfurt to record total passenger numbers of 45-50 million this year, up from the previous forecast of 39-46 million.

But the company acknowledges that the “strong and dynamic” recovery, spurred by lifting of travel restrictions, is presenting “some major operational challenges”.

He claims that extensive measures implemented at the airport, including staff recruitment and support from administrative personnel, have been effective and helped to maintain stable and reliable operations.

“However, there is still a way to go until we will fully meet our own quality requirements again,” he says. 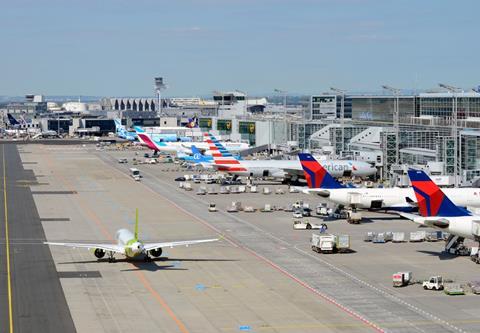 Fraport states that “intensive efforts” are being undertake to eliminate the operational snags but admits its target for global passenger satisfaction is “unlikely to be achieved” this year.

While Fraport generated revenues of €1.44 billion ($1.47 billion) for the first half, it fully wrote down a €163 million loan from the company that holds its minority shareholding in Russia’s St Petersburg Pulkovo airport, Thalita Trading.

The stake cannot actually be divested until at least 2025.

Although Fraport made a first-half operating profit, the write-off and other effects pushed the company into an overall pre-tax loss of €109 million and a net loss of €53 million for the six-month period.